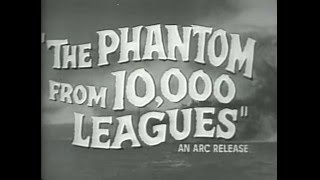 Oceanographer Ted Stevens (Kent Taylor) meets Bill Grant (Rodney Bell), government investigator, at the scene of another beach murder caused by a hideous sea monster that stands guard over a glowing underwater uranium mine. Meanwhile marine biologist Professor King, who created the monster in his laboratory, is being pursued by a beautiful femme fatale who is blackmailing or killing everyone in sight in an effort to acquire King's top secret files for the Russians. The Phantom From 10,000 Leagues is an often dreamlike, comically surreal study in paranoid '50s sociology. It provides an insightful time capsule of attitudes prevalent at the time. When first released, The Phantom From 10,000 Leagues shared a double bill with Roger Corman's first sci-fi film The Day The World Ended. It was released by American Releasing Corp., an organization that evolved into American International Pictures, a company long associated with monsters, rock n' roll, juvenile delinquents and beach parties.

Another of the world's teeming supply of mad scientists manages to rouse a horrible monster out of the ocean using radioactivity. It attacks the coastline viciously, and must be stopped at all costs! Fortunately, a shrewd scientist and his partner in investigation, a government sleuth, manage to track the creature's insane inventors down.

Customer Rating:
Based on 1747 ratings.


If you're into sci-fi from the fifities, Phantom From 10,000 Leagues is quite good! It mixes a film noir intrigue with science fiction in a weird way. Nonetheless, it's entertaining and fun!


This would be a better name for the movie. There are a lot of plot holes but this was the 50s. The Phantom needed more screen time and a better explanation to it's origins. I do love these Cold War movies and this is the first with Spear Guns as the weapons of choice!


First of all, the "Freezing Horror" is very misleading. There is very little focus on the actual "phantom" and mostly on the radioactive deposit it guards and the web of deciept and murder surrounding it.

The clumsy scientific explanation is awful. I have only recently completed my sophmore year of high school, and I know very well that the ocean has no more heavy water (water with deutrium instead of standard hydrogen isotopes) than any other water source. On a side note, does anybody have any guesses as to what the "Phantom" mutated from?

Why is it that we never hear any of the "abundant rumors" of a "Phantom"? How is it from 10,000 leagues? The water it haunts is both shallow and close to shore. I feel sorry for the poor guy in the monster costume who got so little screen time, with the assortment of semi-ugly conspirators stealing the show.


I loved this movie. It is the only sea monster movie I have ever seen so I can't compare it to others but I do know that I saw a cinematic masterpiece. The characters are realistic and I thought Kent Taylor played a hero role well. The evil doctor was also someone you would have thought was sane and you wouldn't think it was him after his assistent was accused, but then he goes and takes down the phantom with himself and you know he felt guilty. Also there is a classic damsel in distress who turns out to be a sidekick for Ted (Kent Taylor). If anyone is looking for a classic Thriller/Sci-Fi for $5, this is It!