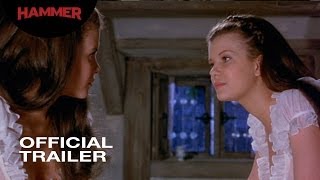 Two beautiful orphaned identical twins, Maria and Frieda Gellhorn (Playboy centerfold models Mary and Madeleine Collinson), move to the village of Karnstein to live with their uncle GustavWeil (played by Hammer horror favorite, Peter Cushing), a fanatical puritan and leader of the local witch-hunting "Brotherhood." The village Count (Damien Thomas, Never Let Me Go), an evil man who secretly practices Satanism, uses black magic and transforms into a vampire. Unhappy with her new life, Frieda seeks escape and tragically falls under the spell of the Count. Now overcome with an insatiable hunger for human blood, Frieda has to hide her secret from her sister, and escape her uncle's killing grasp! The wait is over! This Hammer horror classic is now available from Synapse Films in an all-new 1080p high-de nition transfer and loaded with exciting exclusive special features. Also stars Kathleen Byron (Black Narcissus), David Warbeck (Lucio Fulci's The Beyond) and Dennis Price (Jess Franco's Vampyros Lesbos)!

Stunning identical siblings, one good and the other decidedly evil, are the main characters in this unusual gothic horror film. One of the young women is a vampire, and the other is the "nice girl next door." When the townspeople decide to burn the vampire at the stake they make a tragic error.

The Legend of the 7 Golden Vampires (Blu-ray)
$27.50 Super Savings
Add to Cart