Seeking an elixir of youth, a scientist accidentally turns a woman into a cannibalistic half-insect creature. 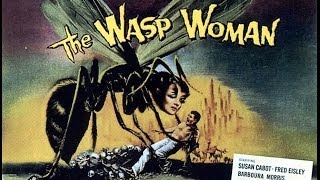 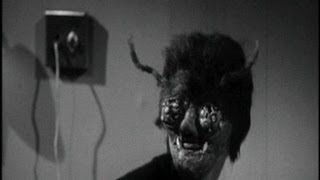 "Miss Starlin is not a human being any longer. The enzymes have changed her--she will destroy the girl as a female wasp would destroy her enemies, and then devour the remains!"
- Zinthrop (Michael Mark) to Bill (Fred Eisley)

Professor Zinthrop (Michael Mark), a renegade scientist offers an aging beauty, Janice Starlin (Susan Cabot), eternal youth by administering injections of wasp enzymes. The experiment goes haywire and Starlin transforms into a hideous, carnivorous half-insect creature bringing death and destruction to all those who cross her path. Made economically in less than a week by Roger Corman, The Wasp Woman, a Filmgroup Production, marked the beginning of Corman's most prolific and creative period. The film features Corman repertoire players Susan Cabot, Barboura Morris, Bruno Ve Sota, William Roerick, Frank Wolff (also seen in Wasp Woman's co-feature Beast From Haunted Cave) and Roger himself making unbilled cameo appearances as a doctor and a policeman.

This fun, intelligent cheapie from King of the B's Roger Corman ranks as the first feminist horror film. Susan Cabot stars as aging cosmetics mogul Janice Starlin, who injects herself with an experimental wasp enzyme in order to restore her fading youth and save her company from going broke. Eccentric scientist Dr. Zinthrop (Michael Mark) first tries the serum on cats, but when they later sprout wings and stingers, he realizes the formula might not be market ready. Unfortunately, he winds up in a coma before he's able to warn Starlin of the ghastly side effects, and before long she's buzzing around the building at night, attacking and devouring her enemies. What's admirably feminist about the film is how Starlin is portrayed as intelligent, powerful, and sympathetic while her male underlings are condescending buffoons who first dismiss her serum as mere wishful vanity and later find themselves smitten by her newly restored beauty (and later bitten by her wasp alter ego). Barboura Morris plays Starlin's worried secretary, and Bruno Ve Sota is an unlucky night watchman. Cabot is splendid in the title role, reverse-aging beautifully. Carolyn Hughes and Lynn Cartwright add comic relief as a pair of gossipy receptionists.

25%off
Voyage to the Planet of Prehistoric Women
$5.95 on Sale
Add to Cart

King of the Zombies
$10
Add to Cart

Customer Rating:
Based on 5499 ratings.


I think it's cute they way they got Susan to play a mean spirited upwardly mobile woman who's ambition and low self esteem drives her to experiment on herself with horrific results.

Those horrific results are however limited to three or four times putting on a wasp mask and killing a guy.

83%off
Descendant / The Fear Chamber / Vampire Journals /...
99¢ Out of Stock
Save for Later
Film Collectors & Archivists: Alpha Video is actively looking for rare and unusual pre-1943 motion pictures, in good condition, from Monogram, PRC, Tiffany, Chesterfield, and other independent studios for release on DVD. We are also interested in TV shows from the early 1950s. Share your passion for films with a large audience. Let us know what you have.
How to Order
Shipping Rates & Options
International Shipping
Return Policy
Request a FREE Catalog
Order Items by Catalog
View Catalogs Online
Safe Shopping Guarantee
Buy a Gift Certificate
About OLDIES.com
Customer Reviews
Contact Info
Privacy Policy
Send Feedback
Login
Forgot Password?
Sign Out
Email Subscriptions
Redeem Gift Certificate
To place an order or for customer service, call toll-free 1-800-336-4627 or outside the United States, call 1-610-649-7565
Open Monday-Friday: 9am-10pm, Weekends: 11am-7pm (Eastern Time)
Se habla Español! Spanish-speaking representatives available, Monday-Friday: 9am-5pm (Eastern Time)
Portions of this page © 2020 TiVo Corporation. For personal non-commercial use only. All rights reserved.
All copyrights, trademarks, and logos are owned by their respective owners. Rotten Tomatoes content and Certified Fresh™ Logo is Copyright © Fandango. All rights reserved.
© 2020 OLDIES.com and its affiliates and partner companies. All rights reserved.