Commando Cody travels to the moon to thwart monster menace Retik's plot to conquer the earth in this action-packed Republic serial. 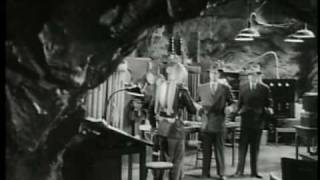 Radar Men From The Moon Trailer

The brave-hearted Commando Cody, "Sky Marshal of the Universe," rockets into action to save the earth in this classic 12 episode sci-fi extravaganza. A string of mysterious bombings striking at our nation's defense systems precipitates the call for the invincible Cody (George Wallace), who's equipped with a state-of-the-art flying suit and space ship. Tracing the source of the attacks to the moon, he travels there and encounters the nefarious Retik (Roy Barcroft), ruler of an advanced civilization. The moonmen are cultivating an atomic substance called lunarium which will power their awesome weaponry in their bid to conquer the Earth. The chilling ray-gun assaults, nightmarish volcanic eruptions and out-of-this-world conclusion make this a sensational galactic adventure. One of Republic Pictures' most engaging serials, Radar Men From The Moon demonstrates the studio's remarkable creativity as well as its resourcefulness. This cliffhanger incorporates footage from their previous chapterplays Darkest Africa (1936), King Of The Rocket Men (1949) and The Purple Monster Strikes (1945), the latter of which also featured Roy Barcroft as the notorious space fiend.

This collection features a selection of episodes from the campy 1950s science-fiction serial RADAR MEN FROM THE MOON. Commando Cody (George Wallace) is sent to the Moon after its power-mad ruler Retik (Roy Barcroft) begins destroying strategic targets on Earth in the hopes of taking over the planet. Features creative special effects by Republic Studio's Howard Lydecker.

Aliens | Science-Fiction | Vintage | Serial
This product is made-on-demand by the manufacturer using DVD-R recordable media. Almost all DVD players can play DVD-Rs (except for some older models made before 2000) - please consult your owner's manual for formats compatible with your player. These DVD-Rs may not play on all computers or DVD player/recorders. To address this, the manufacturer recommends viewing this product on a DVD player that does not have recording capability.

Customer Rating:
Based on 1206 ratings.


If you like action in your films, this is a must. Harken back to the days when life was simple and Saturdays at the Bijou was the most important thing on your agenda. The film quality is as if it was recently filmed. Clear with good audio. Watch in wonder as Comander Cody escapes death time and time again. New technology has nothing on the masters from years gone by. If you don't buy the bulk pack, at least get Volume 2. It will leave you wanting more.


You have to buy this movie! How can you not like a serial...where guys hats never come off their heads, even during fist-fights and when they hit each other over the heads with chairs? The aliens have these great weapons but, for some strange reason, they are dependent upon a couple of local, small-time hoods to carry out their evil plan! What a hoot! In fact, the guy who plays the government agent who shows up in Commando Cody's office every episode or two is more threatening-looking than the aliens! Commando Cody's complicated flight controls for his flying suit are hilarious (as are most of the accompanying sound effects). Best shots are his spaceship gliding over the back lot and his initial "jump" whenever he's on the trail of the Lone Ranger and his henchman. This serial will keep you howling!


I bought this on a whim, not really expecting too much for the price. Surprise! This transfer is clear and sharp. The sound is good and the music score helps keep the pace brisk. The story itself is a good cliffhanger; Commando Cody is a well-rounded hero (scientist, pilot, plus boxer/wrestler) saving Earth from the impending invasion. Clayton Moore, later the lead in the Lone Ranger, play one of the regular thugs here. One thing to note is that this is only half the serial. This is also part of a box set (with The Phantom Creeps and Flash Gordon), so if you're a chapter fan you may want to consider buying that instead.