Bulb-eyed monsters from space invade earth and infest it with giant insects. 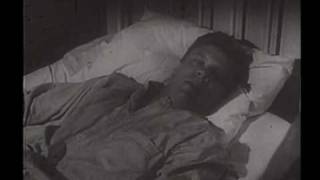 A young and gallant Peter Graves stars in a extraterrestrial nightmare of the nuclear age. While flying over a routine atomic test in Nevada, Dr. Douglas Martin (Graves) spots a strange fireball on the ground. Suddenly, his plane loses control and crashes; the pilot is killed, but Martin survives, totally unharmed. A medical examination uncovers a mysterious scar on his chest, yet Martin has no recollection of the scar or the aftermath of the crash. His ordeal becomes even more perplexing when he inexplicably steals top-secret information from his military colleagues and delivers it to a cavernous area near the test site. Under restraint and injected with truth serum, Martin recalls the impossible truth: he was saved by a squadron of aliens with far superior intellects and monstrously bulging eyes! What's worse, the invaders are mutating insects and reptiles into gigantic carnivores in their bid to conquer the Earth! Killers From Space was directed by W. Lee Wilder (brother of Billy) who also produced Phantom From Space (1953), The Snow Creature (1954) and Manfish (1956).

Creatures from another planet with ping-pong balls for eyes raise a human scientist (Peter Graves) from the dead to have him spy on Earth for them.

Aliens | Enemies | Campy | Kidnapping And Missing Persons | Science-Fiction
This product is made-on-demand by the manufacturer using DVD-R recordable media. Almost all DVD players can play DVD-Rs (except for some older models made before 2000) - please consult your owner's manual for formats compatible with your player. These DVD-Rs may not play on all computers or DVD player/recorders. To address this, the manufacturer recommends viewing this product on a DVD player that does not have recording capability.

Invasion of the Star Creatures
$8.70 Super Savings
Add to Cart

Customer Rating:
Based on 2954 ratings.


I wish I could like this as much as Film Flop does but I just don't. I don't even know why I don't. It seems to have a heck of a lot better plot than say Gila Monster and the aliens are at least little bit more crrepy than the rubber lizzard in Preshistoric Women but something just seems missing in action here.

I think it might have to do with the mechanisim of destruction. The author for whatever reason bypassed the standard Planetary Destructo Beam or hurdeling the Earth into the Sun and opted instead to have the aliens turn our common household pest into much larger common household pest . This just doesn't seem like something the human race couldn't handle.

The roaches I have are already pretty big and thus far I have managed to cope.And mankind has invented shelfpaper that can kill insects.

The scene where Graves is allowed to tour a big bug menagiere is probably worth the six bucks. During the long walk through scene I kept hearing a Monty Python like voice in my head saying "Number twenty seven the humoungus doodle bug..no no keep back children-that doodle bugs' deadly"!


Wow! One of my favorite bad movies.
Yep, here's another one of those sci-fi films that turned up on TV just seconds after the movie projectionist put the reel in the can! What might have been an eerie experience turns into a laughfest. Dreary, vacant interior shots, lousy stock footage of lizards and tarantulas filmed with a zoom lens, aliens having ping-pong balls for eyes and wear overalls attest to an abysmal budget. And most of that budget must have come by way of the tobacco industry, for hardly a moment goes by without have the on-screen cast lighting up their Camels (or Chesterfields or Luckies, or whatever). Peter Graves (and the rest of the cast) try their level best to make overcome the script, but it's like trying to melt an iceberg with a match. But the cast's sincerity is one of the good qualities of this film and the only reason why I like it (aside from the opportunity to laugh a lot). If you're a connoisseur of bad movies, this one definitely belongs in your archive.