Criminals on the run encounter an enigmatic, blood-drinking monster in a desolate cavern. Cleverly written, this well-performed horror yarn is directed by cult favorite Monte Hellman. 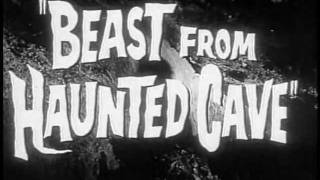 A group of criminals plot a heist in a North Dakota gold mining town. When they take refuge in an isolated cabin, their plans are disrupted by an encounter with a horrendous blood sucking monster. One of the criminals develops a psychic connection to the creature after it devours his girlfriend. The monster tracks them down and decimates the group one by one. The survivors are forced to find shelter in a haunted cave, where they engage in a death-dealing confrontation with the prehistoric mutant. Intelligently written by the prolific Charles B. Griffith (who was also responsible for Roger Corman's The Little Shop of Horrors, It Conquered the World, Not of this Earth, Attack of the Crab Monsters, and many, many others), Beast from Haunted Cave was filmed back-to-back with Corman's Ski Troop Attack, which utilized the same cast and much of the same crew and snow-bound locations. This was also the first film by the extremely talented, but eccentric director, Monte Hellman, who went on to direct a pair of existential westerns starring Jack Nicholson and the cult classic, Two-Lane Blacktop (1971).

Monte Hellman, who would later go on to create the cult classics TWO-LANE BLACKTOP and THE SHOOTING, directs this Roger Corman b-picture about a giant creature that attacks a group of unsuspecting victims in the South Dakota mountains. Gil Jackson (Michael Forest) is a handsome ski instructor who gets more than he bargained for when he agrees to be a guide for Alex Ward (Frank Wolff) and his group of bandit friends. The leader of the gang, Alex convinces his girlfriend Gypsy Berlin (Sheila Carol) to seduce Gil while he and his cronies pull off a major gold heist. They then embark on a trek through the mountainside to lay low while the authorities search for the robbers. Eventually catching onto their criminal ways is Gil, who also manages to win the heart of Gypsy. What no one could have projected is the gigantic beast that resides in a nearby cave and eats human beings like popcorn. As Gil and Gypsy try to escape from Alex, the beast closes in on all of them, culminating in a gigantic battle in a cave to decide who lives, and who dies. Hellman's exploitation thriller is low-budget fun in the truest sense of the term.

Creature from the Haunted Sea (The Film Detective Restored...
$14.50
Add to Cart

The Creature from the Haunted Sea
$10.90
Add to Cart

Customer Rating:
Based on 3549 ratings.


I remember very well watching this as an Afternoon Movie when I was a child. Back then I could not get enough of the weird monster and I believed the creature could turn invisible as it stalked its victims. As an adult when I rediscovered this movie I watched a little closer and learned that I mistook for invisibility was actually just a bad double exposure shot! Oh well, I still love this movie.
Some crooks plan an elaborate gold robbery and set off an explosion in an abandoned mine shaft to distract the people of the small mountain town.
The blast awakens a monster which might be a prehistoric monster or it might be an evil spirit known to the local Indians. Either way it starts tracking down the crooks and kills them one by one.
The monster is imaginative as B movie monsters go. Covered with thick hair it crawls like a spider, has tentacles, a head like a light bulb, spins webs around its victims and drinks blood.
The cast includes Sheila Carol, who is also in THE INCREDIBLE PETRIFIED WORLD; Wally Campo who plays a policeman in LITTLE SHOP OF HORRORS, Frank Wolff who went to Italy and later ended up in things like ONCE UPON A TIME IN THE WEST and Richard Sinatra, cousin of 'Ol Blue Eyes.