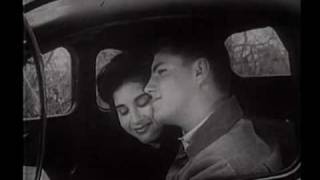 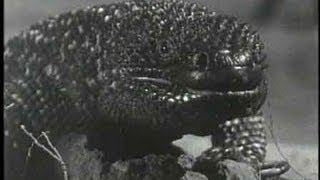 A monstrous poisonous reptile slithers from the depths of the midwest outback to wreak death and destruction on civilization. When teenagers start disappearing from lover's lane, a tough-talking sheriff and teen hot-rodder form an unlikely alliance to find the missing youths. What they discover is a mutant Gila monster large enough to destroy the whole town. Between scenes of low-budget destruction, Chace Winstead (Don Sullivan of Teenage Zombies / Monster Of Piedras Blancas fame) sings a couple of not-bad pop songs while cowboy perennials Fred Graham and Shug Fisher make memorable appearances. The Giant Gila Monster was filmed in Texas back-to-back with another Ray Kellogg/Ken Curtis production, The Killer Shrews.

When a Texas town is threatened by a gigantic lizard, a singing and swinging teenager kick starts his friends into gear to stop the crazed beast. An enjoyable romp through 1950s science fiction drive-in cheese, the sleepy lizard wreaking havoc on miniature sets is no less terrifying than the musical numbers.

Queen of Blood
$19
Add to Cart

Customer Rating:
Based on 5222 ratings.


Remember these movies when I was young. Great show just to set and watch for entertainment.

Yes there are moments, like when the hero hands his ?best girl? unprotected bottles of nitroglycerine and cautions her to be careful with them as they careen across a dirt field in a hotrod. But I can?t honestly say that I would do differently when faced with a giant Gila monster. The small town sheriff was very well written and acted (for a B picture remember), as was our crooning hero played by Don Sullivan?who stretched well beyond any dimensions ever offered by Presley or Avalon.


Before MTV movies were utilized to try to get scenes of people doing thjings while music played and The Giant Gila Monster was made to expose some of these new crazy tunes the kids all loved to dance to.

I don't like this film but I have to defend it because it was made in the Texas dessert and so was I.

There are no special effects. The monster seems to change size often once being bigger than several derailed train cars and a scene later only about half as big as a small barn. There is also no reason for the monster to be. There were no nuclear bomb test or metorites bringing cosmic rays to Earth. The narration suggest that it just got real big.
About the most terrifing thing the monster does is step on people or wreck their cars.

25%off
Monster From A Prehistoric Planet (DVD-R)
$5.95 CYBER WEEK
Add to Cart