The Corpse That didn't Want to Die! 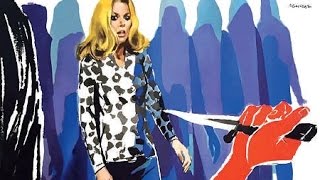 Emilio P. Miraglia directed and co-wrote (with Fabio Pittorru) this Italian-West German co-production, a standard giallo thriller released in the subgenre's most high-profile year. The film begins with a 1958 prologue in which two young girls, Kitty and Franziska, learn the tale of the Red Queen in an old German castle. Supposedly, she comes back every 100 years to claim seven new victims. 1972 is the year of her latest appearance, and the film flashes forward to a mysterious red-caped figure wandering the castle halls. Soon, people start dying, and the adult Kitty (Barbara Bouchet) and Franziska (Marina Malfatti) appear to be among the killer's intended victims. Kitty works for the Springe Fashion Company, whose perverse general manager, Hans, is one of the first victims, and the company's models are soon targeted as well. Alberto Spagnoli's cinematography is particularly noteworthy, and there is plenty of blood and torture for those more interested in the horror elements of gialli than their typically illogical mystery components. Ugo Pagliai co-stars with Sybil Danning, Nino Korda, and Carla Mancini.

Beyond the Darkness
$17.20 Super Savings
Add to Cart