The Last Woman On Earth

After an unexplainable global holocaust, the last three people alive struggle for survival and love in this chiller written by Academy Award winner, Robert Towne. " 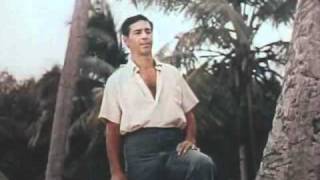 A global holocaust decimates the population of the entire world except for two men and a beautiful woman. Dead bodies litter the streets of a lifeless city. Fleeing the horror, the three survivors take refuge on the fringes of a tropical jungle. In an explosion of sexual tension, the men clash in the pursuit of their desires and engage in an all-out war to possess The Last Woman On Earth. Roger Corman directed this color spectacle in Puerto Rico, back to back with Creature From the Haunted Sea and Battle of Blood Island, another Filmgroup production. It shared much of the same technical crew with both films, and in the case of Creature From the Haunted Sea, the same cast. This was the first produced screenplay for Academy Award-winning writer Robert Towne (Chinatown), who also appears in the film (using the pseudonym Edward Wain) as the young lawyer fighting for control of this sexually charged triangle.

A gangster named Harold (Anthony Carbone), his moll, Mary-Belle (Betsy Jones Moreland), and his lawyer, Martin (Robert Towne), are scuba diving in Puerto Rico when H-bombs wipe out the world. Since these three happened to be underwater at the time, they are the sole survivors and get to wander the empty streets and engage in lots of dialogue about humankind's future. Eventually the men fight over who will mate with Mary-Belle and rebuild civilization. Martin is afraid if she spawns with the thuggish Harold, the world will be repopulated with violent people doomed to a future of more bomb building. On Harold's side is the strong-survive theory of Darwinian natural selection. At least the three get to enjoy some crowd-free shopping before the inevitable showdown. This was the first filmed script by costar Towne (credited as Edward Wain), who would later become the highly respected writer of CHINATOWN and THE LAST DETAIL. Director Roger "King of the Bs" Corman filmed it while on vacation in Puerto Rico, where he also made CREATURE FROM THE HAUNTED SEA with the same cast and crew and produced BATTLE OF BLOOD ISLAND, all on the same trip.

Nuclear Destruction | Post-Apocalypse | Science-Fiction | Love Triangle | Theatrical Release | Crime
This product is made-on-demand by the manufacturer using DVD-R recordable media. Almost all DVD players can play DVD-Rs (except for some older models made before 2000) - please consult your owner's manual for formats compatible with your player. These DVD-Rs may not play on all computers or DVD player/recorders. To address this, the manufacturer recommends viewing this product on a DVD player that does not have recording capability.

25%off
Creature from the Haunted Sea
$5.95 BLACK FRIDAY
Add to Cart

Creature from the Haunted Sea (The Film Detective Restored...
$14.50
Add to Cart

The Creature from the Haunted Sea
$10.90
Add to Cart

25%off
Sexpots From Space Double Feature: Voyage To The Planet of... (DVD-R) TOP 25 Bestselling DVD
$5.95 BLACK FRIDAY
Add to Cart

25%off
Voyage to the Planet of Prehistoric Women (DVD-R)
$5.95 BLACK FRIDAY
Add to Cart

25%off
Voyage To The Prehistoric Planet (DVD-R)
$5.95 BLACK FRIDAY
Add to Cart