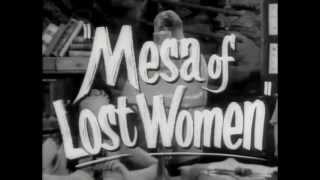 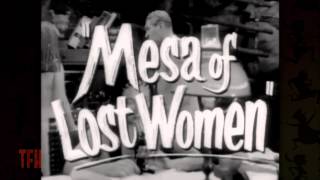 Joe Dante on THE MESA OF LOST WOMEN (Featurette)

Plane crash survivors are discovered wandering through "The Desert of Death." Grant, the pilot, regains his senses in the hospital and relates a tale of horror. A brilliant scientist, Dr. Arana, has devised a bizarre crossbreeding program to create an army of nightmarish creatures. Giant tarantulas, fiendish dwarves and beautiful, scantily-clad superwomen run amuck in his laboratory atop the Zarpa Mesa. Jackie Coogan appears as the mad scientist. Also in the fantastic cast of characters is manly Z-movie stalwart Allan Nixon (Prehistoric Women), Richard Travis (Missile To The Moon), diminutive actors John George and Angelo Rossitto, as well as Ed Wood principals Delores Fuller and Mona McKinnon. The soundtrack, which features flamenco guitar and jarring piano chords, was written by the prolific Hoyt Curtin and later used in Ed Wood's Jailbait.

A mad scientist (Jackie Coogan, "Uncle Fester" from TV's "The Addams Family") has hidden out in the deadly desert known as Zarpa Mesa in Mexico. Here he develops giant spiders, deadly dwarves, and, through the use of a synthesized derivative of spider venom, a race of killer superwomen that cannot be stopped once they choose their sexual prey. This hugely enjoyable film was made by the legendary Ron Ormond, a director whose biggest claim to fame these days is his close association with Ed Wood. However, his movies demand to be seen in their own right, as Mr. Ormond's taste for the bizarre is enough to carry a film by itself.

Customer Rating:
Based on 1678 ratings.


It's hard to determine what's more fascinating about this classic--Jackie Coogan's bizarre performance and make-up, or Hoyt Curtin's musical score. It's hard to believe that the man responsible for just about every great cartoon theme could come up with such crummy music. Ed Wood put the music to much better use in his monumental "Jail Bait".


Corny. Like a State Fair Hot Dog. Not Campy, only a few larfs at best. If it were just a little bit more risque it could have achived the Badness of Plan Nine or Earth VS the Flying Saucers or perhaps even Reefer Madness. But the comnbination of flat script, horrible sound and visual editing and deplorable acting make it just almost unbearable even for Cinetrash affeciandos like myself. I strongly suggest you see it. Once.