In their bid to conquer the world,ray-gun wielding alien teens from space land on earth with a shipment of Gargon monsters. 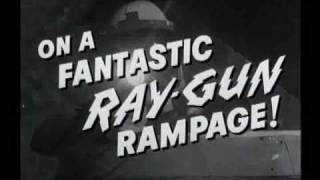 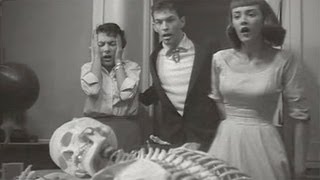 Out-of-control teenagers from outer space land on Earth wielding flesh-dissolving ray guns and blasting all humans who interfere with their destructive rampage. The invaders plan to turn Earth into a breeding-ground for their gigantic claw-monsters, the Gargons. Derek, a renegade alien, falls for a beautiful Earth-teenager and rebels against the brutal unstoppable invasion that threatens our planet. As transport saucers arrive with their horrific cargo of monsters, a terrible sacrifice becomes the final hope for Earth's populace on the verge of total destruction.

On a twenty thousand dollar budget, director Graeff produced, wrote, filmed and cut this movie in which he also stars as one of a gang of spaced-out teens sent to Earth to prepare the way for a lobster-like race of invaders. When one of the delinquents falls for an Earth girl, the others hunt him down with ray-guns.

Aliens (who look like earthly teenagers) come to earth to spawn a race of monsters.

Aliens | Cult Film | Monsters | Science-Fiction | Exploitation | Theatrical Release | Teenagers
This product is made-on-demand by the manufacturer using DVD-R recordable media. Almost all DVD players can play DVD-Rs (except for some older models made before 2000) - please consult your owner's manual for formats compatible with your player. These DVD-Rs may not play on all computers or DVD player/recorders. To address this, the manufacturer recommends viewing this product on a DVD player that does not have recording capability.

Customer Rating:
Based on 5721 ratings.

one of the best of the worst Movie Lover: freeshowBforeyomommawuzborn from LOS ANGELES, CA US -- May, 25, 2006


truly and delisciously DREADFUL. It would get the full 5-stars for horribleness ("Plan 9 From Outer Space" class) if it weren't for the pretty good looking use of a Christmas Tree ornament for the FX on the hubcap landing.


Some teenagers from outer space (17 going on 40) land on earth to see if the planet contains the proper conditions for raising dangerous "Gargon" herds (lobster shadows). While checking the planet out one teen decides letting the Gargons feast on the humans is not the kindly thing to do. The rest of the movie centers on his former buddies hunting him down and "blasting the flesh off" all humans who stand in their way.

I loved this movie the most for its inept acting. The actors nearly shout their lines to one another like everyone around them is deaf. I've never seen acting this wooden, even in an ed wood film.

Teenagers has a cheesey filling and a long shelf life that will stand up to multiple viewings.


Aliens invaded Earth for many reasons during the fabulous 50's but their motive in this film is the best one yet. These aliens need a safe environment to breed an animal known as a "Gargon" which is their main source of food. They have invaded Earth in search of a square meal! The unnamed planet these aliens come from is a militaristic society that would give even George Orwell nightmares. Familial ties are non existant, conformity is the rule and love is unknown. One tender hearted alien named Derek (David Love) decides to rebel against all this and deserts his comrades to see what life on Earth is like. He soon learns about love thanks to pretty Dawn Anderson. Meanwhile the brutal Thor (Bryan Grant, who was also one of this movies many producers) is tracking Derek down and using his flesh disolving raygun to eliminate anyone who gets in his way.
Sounds good, right? Well it had potential but once you see that the Gargons look a lot like ordinary lobsters you know what you are in for.
Earth's atmosphere causes the Gargons to grow much larger than they do at home and one of them just happens to escape so we get a few scenes of a badly superimposed giant lobster attacking startled Earth people. Dawn Anderson gets to run around the ubiquitous Bronson Canyon in a swimsuit, which probably made for some good publicity stills. Watch for Harvey B. Dunn, best remembered from Ed Wood's BRIDE OF THE MONSTER, as the fellow who rents Derek a room in his home.
Writer/producer/director Tom Graeff appears breifly in a cops vs. aliens shootout scene.
Classic? No! Fun? Yes! Worth seeing? You bet?