Something from Nothing: The Art of Rap R 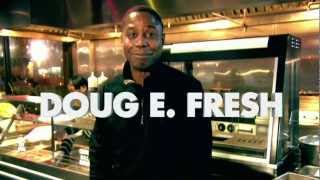 Hollywood Reporter - 01/21/2012
"SOMETHING FROM NOTHING: THE ART OF RAP is poised to school a whole new generation of fans with insights from some of their favorite artists. Loaded with a capella on-camera performances and a soundtrack of killer beats..."
Total Film - 08/01/2012
3 stars out of 5 -- "There's a stack of great moments: KRS-One explaining rap-battling's genesis...Ice revealing what he does when he forgets lyrics during a show, Grandmaster Caz writing a rap on the spot."
Sight and Sound - 08/01/2012
"In its structure and delivery, the documentary seems to have been constructed like a well-written rap song. It has a rigid focus on the central premise but allows the filmmaker and his interviewees to riff around the subject."

Join legendary rapper Ice T on a guided journey into the heart and soul of hip hop music as he travels from coast to coast, interviewing some of the most inspired and creative artists ever to step up to the mic. Dr. Dre, Ice Cube, KRS-ONE, Nas, MOS DEF, Afrika Bambaataa, Snoop Dogg, Eminem, RUN DMC, and a host of other artists reflect on the evolution of hip-hop, and the artists who have helped turn it into a global phenomenon.