A man is haunted by his past evil deeds. 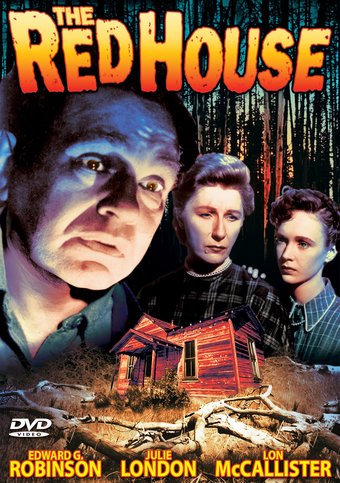 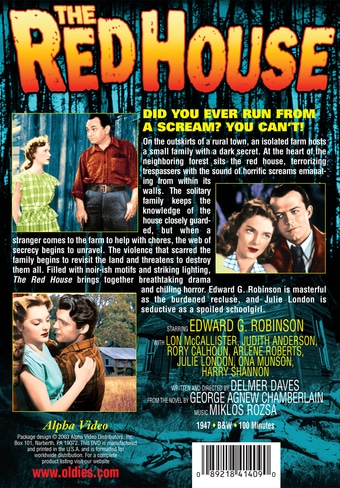 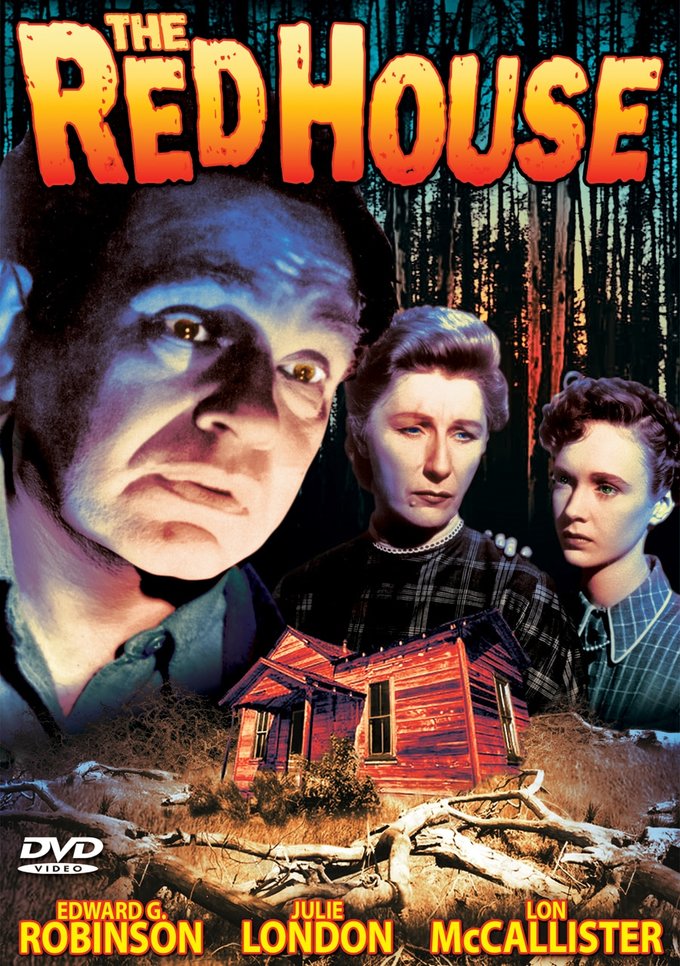 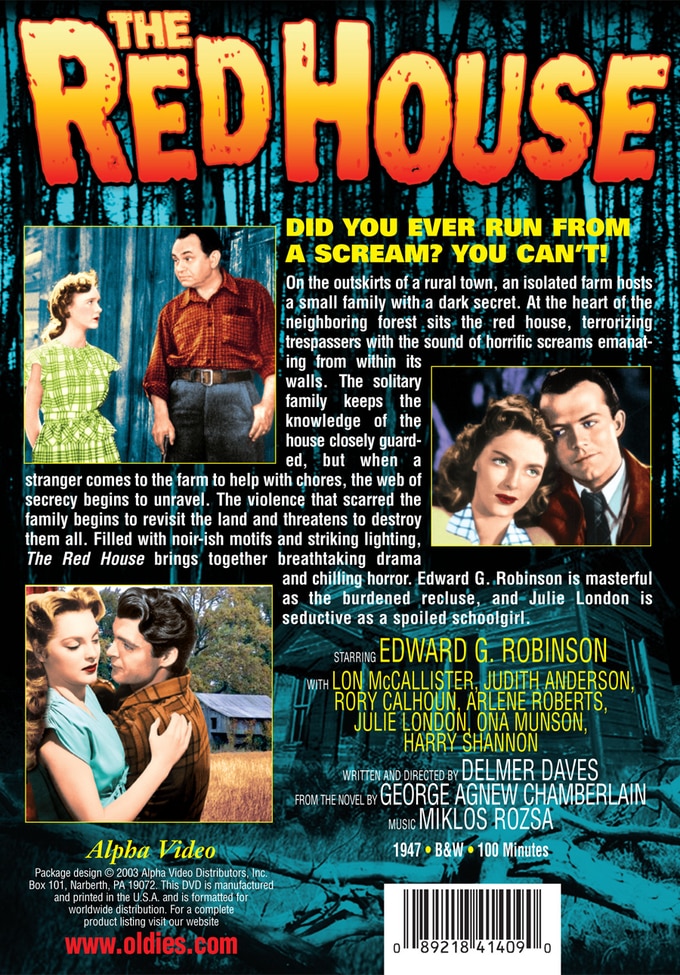 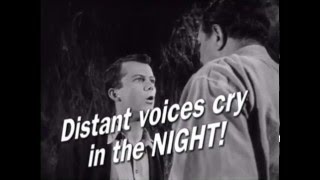 DID YOU EVER RUN FROM A SCREAM? YOU CAN'T! On the outskirts of a rural town, an isolated farm hosts a small family with a dark secret. At the heart of the neighboring forest sits the red house, terrorizing trespassers with the sound of horrific screams emanating from within its walls. The solitary family keeps the knowledge of the house closely guarded, but when a stranger comes to the farm to help with chores, the web of secrecy begins to unravel. The violence that scarred the family begins to revisit the land and threatens to destroy them all. Filled with noir-ish motifs and striking lighting, The Red House brings together breathtaking drama and chilling horror. Edward G. Robinson is masterful as the burdened recluse, and Julie London is seductive as a spoiled schoolgirl.

Edward G. Robinson stars as Pete Morgan, an honest small town student who finds after school employment with local farmer Nath Storm (Lon McCallister). Things go awry for the sedulous Pete one day, when he takes a short cut home through haunted woods. Storm warns Pete to stay out of the woods and away from THE RED HOUSE within. Unwilling to buy into the supernatural hocus pocus, Pete enlists the help of Storm's fresh-faced and innocent daughter, Tibby, to help him solve the mystery of THE RED HOUSE.

Director Delmer Daves only endeavor into the horror genre, THE RED HOUSE starts out slow, but ends with a bang. Young Julie London is swooning as the virginal Tibby and McCallister's expressions of madness and trepidation seem absolutely authentic. Miklos Roza's score is perhaps the most fun, as it prominently features the Theremin: an instrument played without touch often heard in early sci-fi films.

Mystery | Suspense | Thriller | Film Noir | Theatrical Release
This product is made-on-demand by the manufacturer using DVD-R recordable media. Almost all DVD players can play DVD-Rs (except for some older models made before 2000) - please consult your owner's manual for formats compatible with your player. These DVD-Rs may not play on all computers or DVD player/recorders. To address this, the manufacturer recommends viewing this product on a DVD player that does not have recording capability.

Customer Rating:
Based on 4986 ratings.


An eerie mystery until the last 10 minutes, it kept me on the edge of my seat.


For some reason I expected a better movie than this. (Then again it's hard to have a story about a red house in a black and white film.) It's great seeing a young Julie London - wow she was hot - but what's with Edward G Robinson? He overacts and emotes his way through the role.


this must be one of the best of the alpha releases. a true classic of suspense. the night scenes in the forest are really creepy and robinson does himself proud as the 'kindly' farmer with a dark secret. recommended.


I'll keep it short, and sweet.

Buy this film. Robinson and Anderson are probably two of the greatest screen actors of any era. The story is intense and the performances are first rate.


This is one of my favorite movies from any era. I love the atmosphere, the mystery, and especially the characters (even wacky Pete, E. G. Robinson). I first saw this movie on the late, late show. Every time I watch it now, it takes me back to that first night. AS I build my collection of DVD's, my goal is to find movies as good as this one.


I agree with the above reviewers comments about the quality, but I have had a vhs copy of this from another retailer, and the quality is the same. It is possible that the original print has deteriorated. However, the plot of this movie and the acting makes up for any deficiencies in the film. The film also features Dame Judith Anderson and Rory Calhoun in a delightful villainous role. Enjoy.


This is a great 40's film with a chilling performance by Edward G. Robinson. Robinson plays a farmer who committed a murder years ago and is now slowly decending into madness. Some of the scenes in the woods near the farm during a thunder storm will raise the hair on the back of your neck. The red house, hidden in the woods makes it'a appearance in the second half of the film when it becomes clear what the mystery is all about. The Alpha dvd picture is a little scratchy but ok, and the sound is slightly muffled. However, it is still a watchable and engrossing movie, and in the 5-10 dollar range, who's complaining. This is one of my favorite movies and the less than 5-star rating is because of the print and sound quality.

Reviewed by Rick Rogers, a lifelong movie fanatic, who was raised in a movie theater and saw most of these films on the big screen.