Monstrosity (aka "The Atomic Brain")

A woman's brain is transplanted into the head of an animal. 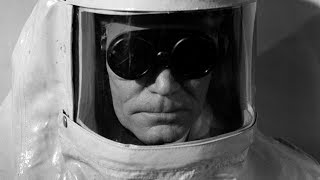 In a dungeon laboratory inhabited by sub-humans and fresh corpses, a scientist conducts revolting experiments in an attempt to achieve immortality. His demented patron is an elderly invalid who wants her brain transplanted into a healthy young girl. Three beautiful women are lured to the isolated manor so that the ruthless hag can choose her new body. Once the victim has been chosen, the doctor claims the other two girls as guinea pigs for his gruesome experiments, and transplants the brain of a cat into one of them. When the two remaining young women begin to suspect their fates, they are plunged into a devilish game of cat-and-mouse, pursued by the doctor, the old woman and her sadistic henchmen. This macabre tale ends with a horrific, vengeful twist.

25%off
The Amazing Transparent Man
$5.95 on Sale
Add to Cart

The Brain That Wouldn't Die (The Film Detective Restored...
$10
Add to Cart

Customer Rating:
Based on 3003 ratings.

Could transplanting brains really be this much fun? Movie Lover: Dr. Maniac from Maniac Manor -- September, 28, 2004


When MONSTROSITY was brand new a review in "Daily Variety" said the title was not only descriptive but accurate. Well who cares, this is still a fun film and the sort of thing that drive-in managers used to love.
Rich old Mrs. March (Marjorie Eaton who was far more likable in NIGHT TIDE and ZOMBIES OF MORA TAU) is tired of being a decrepit old lady so she installs Dr. Frank (Frank Gerstle, who wa sin KILLERS FROM SPACE and THE FOUR SKULLS OF JONATHAN DRAKE) in her home. The (ahem!) good doctor can transplant brains. He brought a dead man to life with a dog's brain in his skull. Okay, so he mutated into a half human monster, the experiment worked . . .sort of! Mrs. March imports three au pair girls from Europe to work in her home. One will be the "lucky" girl to have Mrs. March's brain placed in her skull! Will the doctor succeed? Will Mrs. March get a whole new life? WIll this movie ever end?
Director Joseph Mascelli had been Ray Dennis Steckler's photographer on the gonzo classic THE INCREDIBLY STRANGE CREATURES WHO STOPPED LIVING AND BECAME MIXED UP ZOMBIES so he was no stranger to low budget work. Potential victims include Judy Bamber who was in the black comedy classic A BUCKET OF BLOOD and Erika Peters who costarred in the seldom seen HOUSE OF THE DAMNED.
Watch for fun moments like when brain transplants are performed but the doctor never bothers to shave the patients head! Size does not matter I guess because the doc puts a cats brain (Xerxes the cat, who gets last billing in the closing credits) into a human skull and vice versa with relative ease.
This movie has "late nite TV" written all over it. Get this and THE BRAIN THAT WOULDN'T DIE and make your own drive-in double feature.


A truly unusual "Sci-Fi" film. Alpha video has issued a fairly watchable print of this one and as always, the price was right.


Alpha Video has come out with weird little gem about a mad doctor experimenting with young women and brain transplants. An old woman wants a young body but ends up getting her brain put inside a cat!! Excellent feature and Alpha has a great print. It's about time someone took this gem out of hiding and put it on DVD. If you're a horror fan you won't be disappointed.