The Greatest Story Of The West Ever Filmed! 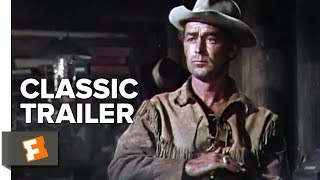 George Stevens' classic Western, adaptated from the Jack Schaefer novel, stars Alan Ladd in the title role. Riding the ranges of Wyoming's Grand Tetons, Shane stops at the farm of homesteader Joe Starrett (Van Heflin) just before Ryker (Emile Meyer), a powerful and predatory cattleman, arrives with his hired muscle to make the farmer a threatening offer for land that he intends to get by any means necessary. When Shane lets the cattle baron know that his gun will back Starrett if there's any trouble, the grateful homesteader offers the stranger a job as a hired hand, which he accepts. Joe's young son Joey (Brandon de Wilde) is drawn to the quiet stranger, whose difference from the men he knows is confirmed by the accidental revelation of a gunfighter's lightning reflexes. Shane becomes a valuable asset to the farm, but is slowly drawn into the continuing hostilities between the two opposing groups. To complicate matters, Shane feels an unspoken, and unwanted, attraction to Starrett's wife Marian (Jean Arthur). This creates a sense of ambivalence in Joe, whose son already idolizes the gunslinger. Stevens' meticulous artistry imbues the simple Western with the mythic aura of an Arthurian legend, as Loyal Griggs' beautifully composed images provide the canvas for career performances by Ladd, Heflin, Arthur, and de Wilde, in what many regard as the finest western ever made.

Director George Stevens based this landmark western on Jack Schaefer's best-selling novel.
Shane, a handsome loner, rides into a Wyoming valley seeking refuge from his difficult past. He discovers the Starretts, a pioneer farm family looking for a hired hand. Suddenly, Ryker and his posse of gun-toting ruffians ride by and threaten to run Starrett off his farm. Ryker, a ruthless businessman, has been trying to rid the valley of homesteaders so he can expand his ranch. After witnessing this brutality, Shane decides to stay on and help out. Provoked by Ryker's boys, Shane joins the homesteader's fight, facing off with a hired gunslinger to make the valley safe for civilized folks like the Starretts. Shane's bravery wins Mrs. Starrett's heart. But this honorable horseman is going to ride off into the night alone.