A series of "vampire murders" terrorize a European village. 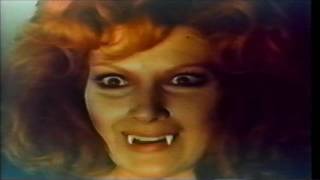 In a desolate European town, cannibalistic vampires anxiously await their prey. When a busload of tourists are stranded in the village, the undead army, led by a vampire Countess, pounces upon their helpless victims. One by one the visitors are slaughtered by the vampires in sadistic and brutal rituals. Those remaining make a final desperate attempt to escape certain death in a gory, nightmarish battle for survival. This Euro-cult classic is atmospherically chilling and features a veteran international cast. From the ominous creak of the inn's front door to the blood-thirsty Countess' eerie rise from her tomb, veteran horror director Leon Klimovsky creates a top-shelf ghoulish tale of bloodlust and cannibalism. Contains Nudity.

When their driver has a heart attack at the wheel, a bus of tourists visits a Spanish village for the night. While it seems deserted at first, it turns out to be populated by dozens of very hungy vampires. Helga Line stars in this effective, 1973 Euro-horror cult curiosity.

Vampires | Racy
This product is made-on-demand by the manufacturer using DVD-R recordable media. Almost all DVD players can play DVD-Rs (except for some older models made before 2000) - please consult your owner's manual for formats compatible with your player. These DVD-Rs may not play on all computers or DVD player/recorders. To address this, the manufacturer recommends viewing this product on a DVD player that does not have recording capability.

Customer Rating:
Based on 775 ratings.


This film is absolutely one of the best true "Horror" films of our time. Director Leon Klimovsky is brilliant, as are the rest of the Spanish cast and crew (especially Manuel de Blas, one of my favorite actors). The film has a certain ambiance to it which resonates with you long after you have finished viewing it...Again, this is one of the best horror films ever made!! Pick it up from Oldies.com TODAY!!