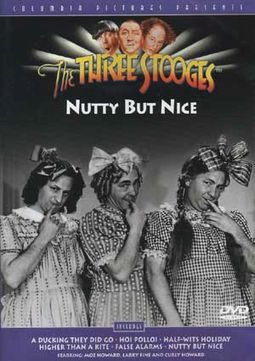 Six classic shorts on one disc from legendary comedy team The Three Stooges!

A Duckling They Did Go (1939): Hiding out after a daring watermelon heist, The Three Stooges take jobs selling Duck Club memberships. But things aren't all they're quacked up to be, and Larry, Moe and Curly soon find they're decoys in a scam involving the club.

Hoi Polloi (1935): You can take out the garbage, but you can't take the garbageman out of the Stooge, as a respected professor finds out when he wagers his colleague $10,000 that he can transform even the Stooge-est men into gentlemen.

Half-Wits Holiday (1947): In this remake of Hoi Polloi, The Three Stooges are plumbers who plunge to great depths to be introduced to high society. This was the last starring role for Curly, and features the first appearance by Emil Sitka.

Higher Than A Kite (1943): Mechanical failures Larry, Moe and Curly take refuge in a bomb shelter while attempting to escape after they rearranged the engine of their Colonel's shiny new car. When they drop in on a meeting of German officers, they somehow manage to overthrow the enemy.

False Alarms (1936): The Three Stooges make a date with disaster when they try to keep up with their social affairs while working for the fire department. Larry and Moe are determined to resist temptation, but when Curly needs dates for his honey's friends, everyone gets hosed.

Nutty But Nice (1940): In order to cheer up a girl whose father has been kidnapped, two doctors prescribe laughter to be administered by the Stooges. It doesn't work, but when they find out her father always answers his daughter's yodels, they discover the real cure for the problem.

Non-stop hilarity is the order of the day in this single volume that includes six episodes of the boys' most notorious antics, including "A-Ducking They Did Go," "Hoi Polloi," Half-Wits Holiday," Higher than a Kite," "False Alarms," and "Nutty But Nice." Highlights include various hijinks, from a professor's ill-fated attempt to transform the stooges into gentlemen to their wacked out adventures with the British R.A.F. to the terrible trio's stint as town firemen.

The Three Stooges
The Outlaws Is Coming (DVD)
$14.50
Add to Cart