Life is a journey. Family is a trip.

Currently Out of Stock: We'll get more as soon as possible
Notify Me When Available
Add to Wishlist
Format:  DVD
sku:  XRI 09576D
Also released as:
Peace, Love & Misunderstanding (Blu-ray) for $27.50
91% recommend us! 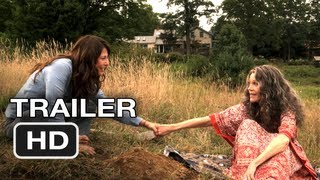 Chicago Sun-Times - 06/06/2012
3 stars out of 4 -- "[A] charming comedy....It essentially focuses on the three women, and Fonda, Keener and the fast-rising Elizabeth Olsen look plausibly like three generations from the same genes. "
Los Angeles Times - 06/08/2012
"[T]his is Fonda's party. She navigates the emotional bumps, breakdowns and repairs of family life with a kind of soft yet steely resilience that keeps things just short of sappy."

Director Bruce Beresford brings Jane Fonda back to the screen in this comedy-drama about a mother and daughter who have precious little in common. Diane (Catherine Keener) is a straight-laced Republican lawyer who lives in Manhattan with her teenage children Zoe (Elizabeth Olsen) and Jake (Nat Wolff). However, Diane's marriage to Mark (Kyle MacLachlan) has fallen apart, and after receiving the final divorce papers, she needs to get out of the city for a while. Diane and her kids head to upstate New York, where she's decided it's time they met her mother Grace (Jane Fonda). Unlike her daughter, Grace was and is a proud hippie, the unofficial leader of the town's countercultural community who supports herself by selling marijuana. Grace and Diane haven't spoken for nearly twenty years, and just as Grace hasn't changed a bit over the years, Diane hasn't found a way to forgive her for her failings as a parent. As mother and daughter get reacquainted, Zoe has her head turned by Cole (Chace Crawford), even though he's a butcher and she doesn't eat meat, and Jake falls for Tara (Marissa O'Donnell), who he meets at a coffee shop. And as Diane searches for common ground with Grace, she also finds time to be romanced by local musician Jude (Jeffrey Dean Morgan). PEACE, LOVE, & MISUNDERSTANDING received its world premiere at the 2011 Toronto International Film Festival.

20%off
The Losers
$12 Super Savings
Add to Cart