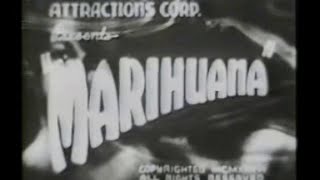 Marihuana chronicles the downward spiral of a group of teenagers from frivolity into the depths of decadence brought on by smoking the "giggle weed." A young girl drowns while skinny-dipping at a beach party. Another teen gets pregnant after a turn with her boyfriend in the sand - both the result of dope smoking. The mother-to-be gives up her baby and becomes a hardened drug dealer, earning fur coats and diamond rings while coldly turning her clientele into drug addicts. With a central message that using marihuana incites "the user to extreme cruelty and license" and down the path to hard narcotics, this 1936 precursor to Reefer Madness is a cult classic by director/producer and exploitation master Dwain Esper. Contains nudity.

Marley Wood, Hugh Mc Arthur, and Pat Carlyle host this 1930's propaganda film, depicting the horrors of marijuana use. A high school girl is led to ruin after befriending a drug dealer who invites her to a party at his beach house.

Campy | Cult Film | Drugs | Vintage | Substance Abuse | Exploitation | Documentary | Road To Ruin
This product is made-on-demand by the manufacturer using DVD-R recordable media. Almost all DVD players can play DVD-Rs (except for some older models made before 2000) - please consult your owner's manual for formats compatible with your player. These DVD-Rs may not play on all computers or DVD player/recorders. To address this, the manufacturer recommends viewing this product on a DVD player that does not have recording capability.

Customer Rating:
Based on 905 ratings.


This one, while some of the scenes and actios might make one think that a better title would have been 'The Silliness Weed' is several cuts above some of it's room mates, like Reefer madness. Story runs better, and is far more valid than the latter. Surprisingly provocative in the sexiness too. Where on Earth was the puritain Mister Hayes when they managed to put this on the screen?


While not quite up to the impossibly high standard set by his masterpiece "Maniac", this classic catches master director Dwain Esper in all of his glory. Brilliant acting, writing, and direction all mesh together seamlessly to make this a must see.


You can't talk about Exploitation FIlms without mentioning Dwain Esper. The former real estate agent turned director gave us some of the most memorable, not to mention the most sleazy, of all time and this one is no exception.
Rich girl Burma (Harley Wood) smokes one joint at a party and gets involved with such things as nude swimming. Despite having used the "Killer Weed" only once both Burma and her boyfriend (Pat Carlyle) are hooked and have abandoned their high society families for a life of crime. Pat gets killed during a robbery so Burma dyes her hair, changes her name to "Blondie" and goes in with a gang of dope smugglers, eventually becoming their boss. Soon she is the most feared gangster in town. Burma . . .er . . .Blondie decides to get even with her straight laced sister by kidnapping her daughter and holding her for ransom. This leads to an amazing plot twist that brings us to the somber, but for Dwain Esper very typical, conclusion.
These drug films of the 30's are certainly over the top with their scare tactics but we now know they were exaggerated because medical science at the time knew very little about the cumulative effects of many of these drugs. While can laugh (indeed we can HOWL) at movies like REEFER MADNESS (which Dwain also owned the rights to) there is nothing to laugh about in this film.
Approach it with caution.


You bet she does!

And this film proves that a life of lascivious deviant sax behavior is just a toke away.
Being one of the original fans of "Refer Madness" I was prepared not to like "Marjauana Weed With It's Roots in Hell" and for good reason. One watches "Madness" for the terrible script, the exaggerated acting, the morality play style of the awful script and the overall campiness.

MWWIRIH has these elements but not to the extreme as does "Madness". In fact if one were to punch up the script, hire Louis Gossett Jr. to play a tough but fair drug enforcment agent and throw in a couple of high tech computer generated chase scenes this might not be a bad crime drama.

It already has the mandatory bare breast scene during the first 19 minutes. But that's all it is. Six ladies nekkid from the waist up for about 3 seconds and later we a bit of thier bums as they get high and swim "Without bathing suits...oooooo.." Your kids have seen worse nudity on video games.

So the story plays out pretty well for a movie of it's time period and overall I found it sort of engrossing in a historical aspect. In fact I was getting into it. I even found myself thinking "No Mary! Don't smoke the giggle weed!"

I even found the enactments of people getting high fairly realistic (I guess..of course I would have NO way of really knowing). They smoke they get the giggles and start feeling amourous. Of course the end result of every "session" is a horrible fate for one of the victims of this narcotic opiate. Compare this to the scene in "Madness" where the piano player steals away into a closet to smoke some refer and goes into a convulsive addiction bordering on the maniacal.

These chicks just get naughty!