The Devil comes to town in the guise of mysterious young man and brings death and horror to those he befriends. 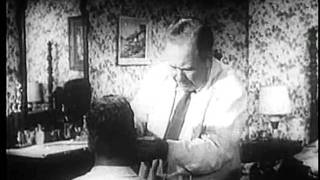 An old hermit makes a pact with the devil and is resurrected as a young man. He poses as Nick Richards and begins practicing black magic in the hermit's shack. In sinister ceremonies involving sacrificial goats, Nick is able to transform into demonic animals and wreak havoc in a small town. The village sheriff and doctor begin to get suspicious after a series of deaths and are shocked as their horrifying fears are confirmed. Ed Nelson (The Brain Eaters, Night Of The Blood Beast) gives an eerie performance as the Devil's partner in this ghastly tale.

When an odd man appears in a small town to collect an inheritance he brings devil worship and death with him.

Occult | Good Vs. Evil | Theatrical Release
This product is made-on-demand by the manufacturer using DVD-R recordable media. Almost all DVD players can play DVD-Rs (except for some older models made before 2000) - please consult your owner's manual for formats compatible with your player. These DVD-Rs may not play on all computers or DVD player/recorders. To address this, the manufacturer recommends viewing this product on a DVD player that does not have recording capability.

Condemned to Live (The Film Detective Restored Version)
$9.99 on Sale
Add to Cart

Customer Rating:
Based on 464 ratings.


The noire-ish back drop is very effective and Ed Nelson`s acting is superb in this low-budget sleeper.It features unorthodox satanic exploits and all told was a unique offering for the genre.You`ll be too scared to laugh at this one, I assure you.


Edgar Buchanan is best remembered as the likably lazy Uncle Joe Carson from the TV show "Petticoat Junction" but for many years prior to that he played dramatic roles, usually in westerns. In this 1958 film he is a smalltown doctor who comes to believe that a local resident has been given amazing powers by selling his soul to the Devil . . . and he's right!
Old Pete (Ed Nelson) makes a pact with you-know-who in the opening minutes of the picture, these scenes are especially effective and scary.
The old man gains youth, wealth and the ability to change into various animals. Naturally no one believes any of that stuff; but when people who start getting too close to learning the truth begin turning up dead, well even the local sherriff has to wonder.
The cast is great. Watch for Richard Crane from the TV series "Rocky Jones, Space Ranger" as a gas station owner who is mutilated by his own (bewitched) dog and almost loses girlfreind Jean Allison to Old Pete, I mean Young Pete. Also in the cast is Byron Foulger who played many character roles dating back to the early 30's.
This is a fun film, moderately scary. Oh, and this is the rare UNCUT 73 minute version! There is another version which was edited down to 61 minutes when this movie played drive-ins on a double bill with MONSTER OF PIEDRAS BLANCAS. Thanks to Alpha Video for digging up the unct print.


The cover art really makes this look like a fantastic movie but know that nowhere in this motion picture does anything even a little like what is depicted here happen.

Someone told me it was a "Occult Classic" and certainly it is the earliest film I have seen (1958) where devil worship is the dominant form of evil and in that light it might be a classic. But...whew there are better classics to be had!

A couple of amusing lines but nothing to larf out loud at.