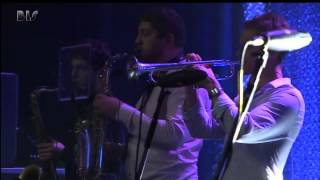 Audio Mixer: Steve Greenwell.
Recording information: Blackbird Studio, Nashville, TN; Sear Sound, New York, NY; Sono Studios, Prague, Czech Republic; Stevestudio, New York, NY.
Photographers: Charles Allen Smith; David Venni; Daniel Slezinger.
Joss Stone launched her career by singing soul standards so when it came time for a reboot she went back to the beginning, dusting off the old blueprint for The Soul Sessions and following it to a T, right down to replicating its title and giving a contemporary alt-rock hit a soul makeover. First time around, the intent was to prove that teenage Joss had soul bona fides, but in 2012 the purpose of The Soul Sessions, Vol. 2 is to signal how she's done messing around with fleeting fashions and is getting back down to the real business. Stone doesn't dig deep into the crates this time around, nor does she stick to deep soul; she chooses to mine hits from the early '70s, favoring songs by the Dells, the Chi-Lites, and Sylvia, giving these smooth tunes a bit of a polished Southern spin. And "professional" is the operative word here: this is the work of seasoned veterans who play with every note falling neatly into place, stretching just enough to show off their chops but never enough to alter the DNA of a song. The exception to the rule is, of course, "The High Road," a Broken Bells song refashioned to sound old, thereby occupying the same space as Joss' White Stripes "Fell in Love with a Boy" cover did on the first Soul Sessions. This is the song to prove that Stone isn't living in the past but rather she's seeing the future through a retro prism that turns everything into something that feels classic. That Stone remains a bit too theatrical a singer, overemphasizing every phrase, is almost besides the point, as she's a diva and is expected to sing with more gusto than the song requires just as long as the overall package feels right. And, for the most part, The Soul Sessions, Vol. 2 does feel right: it has the form and sound of classic soul while never acknowledging that R&B continued to develop past, say, 1972. For an audience that agrees with that thesis, this is fun. ~ Stephen Thomas Erlewine

79%off
Soundtrack
Desperate Housewives (Music From and Inspired By)
$2.99 Super Savings
Add to Cart
(10+)