An escaped convict is made invisible and goes on a killing spree. 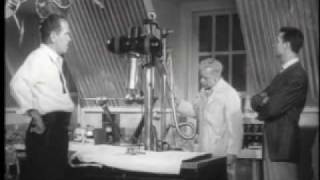 Bank robber Joey Faust is subjected to atomic rays by a gangster and a mad scientist, rendering him invisible and capable of plundering the world's most guarded vaults. The ring of criminals embark on an unstoppable crime wave, gathering resources towards their ultimate goal - the creation of an invisible army to conquer the world. As the shadowy thief begins to suffer the poisonous side effects of the radiation, a beautiful woman forces Faust to re-think the horrific plan. Unable to turn to the law for help, the invisible safecracker becomes the final unlikely obstacle between the power-hungry madmen and world domination.

Auteur Edgar G. Ulmer directed The Amazing Transparent Man back-to-back with another science fiction drive-in classic, Beyond the Time Barrier, filming both on location in Texas.

An expert safecracker named Faust (Douglas Kennedy) turns invisible via radioactive rays in this low-budget science fiction-crime movie hybrid, directed by cult icon Edgar G. Ulmer (DETOUR, THE MAN FROM PLANET X). A beautiful dame (Marguerite Chapman) busts Faust out of jail and takes him to a remote Texas mansion where her evil spy boyfriend Krenner (James Griffith) plans to turn him invisible and have him break into safes at heavily guarded military installations. Once invisible though, the ruthless Faust has other plans, like stealing Krenner's girl, and as much money from as many banks as he can. Bags of cash start floating out of vaults all over town, and the police are forced to admit they have no way of catching an "invisible safecracker." Ivan Triesault co-stars as Dr. Uloff, the kindly ex-Nazi scientist who has mastered the secrets of invisibility. Ulmer shot this simultaneously with BEYOND THE TIME BARRIER on the same Dallas locations. The special effects are creative if crude, and there's even a nuclear explosion in this fun, fast-paced picture.

Thieves | Nuclear Destruction | Science-Fiction | Vintage | Theatrical Release
This product is made-on-demand by the manufacturer using DVD-R recordable media. Almost all DVD players can play DVD-Rs (except for some older models made before 2000) - please consult your owner's manual for formats compatible with your player. These DVD-Rs may not play on all computers or DVD player/recorders. To address this, the manufacturer recommends viewing this product on a DVD player that does not have recording capability.