1.2K ratings
Currently Out of Stock: We'll get more as soon as possible
Notify Me When Available
Add to Wishlist
Format:  DVD
sku:  XRI 80808D
91% recommend us! 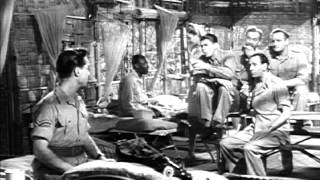 Monsoons drench them. The sun scorches them. Still, the Allies fight doggedly through Burma in 1945. For easygoing Yank (Ronald Reagan) and hard-headed Lachie (Richard Todd), the road to victory ends at a jungle hospital. With the help of a devoted nurse (Patricia Neal), they face a new battle called recovery.

Richard Todd plays an insufferable Scots soldier confined to a World War II military hospital. Ronald Reagan is an all-American patient who befriends the headstrong Scotsman, while Patricia Neal is the compassionate nurse. Gradually the patients grow begrudgingly fond of Todd, and when it is learned that he is suffering from a fatal illness, everyone involved tries to keep his true condition a secret from him. Todd inadvertently discovers the truth, and violently turns against his new buddies. But before the fade-out, friendship wins out over bitterness and self-pity. Filmed in England, HASTY HEART is based on the stage play by John Patrick.