Voyage to the Planet of Prehistoric Women

Astronauts land on Venus and discover prehistoric monsters and a race of beautiful women. 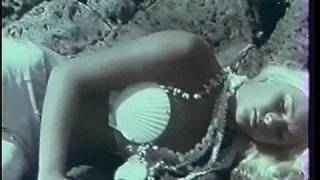 Voyage to the Planet of Prehistoric Women 1968 (Clip)

A team of astronauts is stranded after crash landing on Venus. The mysterious planet holds many perils for the crew, who are assaulted by prehistoric creatures and bewitching alien women. The Venusian sirens are enraged when the astronauts kill their god, a terrible flying beast, and vow to destroy the invaders. Turning their fury against the explorers, the beautiful aliens call upon the deadly powers of their ancient gods. As the planet is engulfed in lava and assaulted by storms, the Earthlings must find a way to escape Venus and prevent their ultimate destruction.

Roger Corman hired Peter Bogdanovich to film scenes of Mamie Van Doren which were paired with groundbreaking special effects taken from the Russian film Planeta Burg. Voyage to the Planet of Prehistoric Women was Bogdanovich's directorial debut and also featured him as narrator. Corman had previously utilized footage from Planeta Burg in 1965's Voyage to the Prehistoric Planet.

Campy | Cult Film | Prehistoric | Science-Fiction | Space Exploration | Racy
This product is made-on-demand by the manufacturer using DVD-R recordable media. Almost all DVD players can play DVD-Rs (except for some older models made before 2000) - please consult your owner's manual for formats compatible with your player. These DVD-Rs may not play on all computers or DVD player/recorders. To address this, the manufacturer recommends viewing this product on a DVD player that does not have recording capability.

25%off
Voyage To The Prehistoric Planet
$5.95 on Sale
Add to Cart

Customer Rating:
Based on 1673 ratings.


Also known as Gill Women, Gill Women of Venus) This is another movie that Roger Corman commissioned to be built around footage taken from the Russian sci-fi movie he bought, Planeta Burg (Voyage to the Prehistoric Planet is another). Peter Bogdonavich directed the new footage, which includes Mamie Van Doren. A team of astronauts and their robot named John travel to Venus, where they crash land. As soon as they step off the ship they have to fight some dinosaurs (they look like guys in Godzilla suits would look if they weren't surrounded by miniature sets to make them look big). Another ship lands to look for the lost crew, and they're nearly eaten by a giant carnivorous plant. While these dull scientists wander on Venus, saying stupid things and poking along in a little Jetsons car, Venusian women in tight white bellbottoms and seashell bras dive for fish and eat them raw. The women on Venus are disproportionately platinum blonde. The scientists shoot down the awkward-looking pterodactyl that is the women's god, then explore underwater and find pterodactyl statues and an octopus with a mustache. The women bury the miserable puppet-god at sea and swear vengeance on the invaders who killed it (people get MAD when you kill their puppets, buddy!), and they set to work praying up volcanic eruptions and storms. If you've seen Voyage to the Prehistoric Planet then you'll get deja vu all over again, since most of this film is identical. Bogdonavich provides the narration. Very strange, if you can make it through the leaden pacing.


It seems Corman must have had some insight into the coming "2001 A Space Odyssey". The opening sequence which I belive is from a Russian film utilizes a lot of models which while far from the prescision of 2001, seem to suggest the same voyage into a future space. Now do not get tis film thinking there will be a hearty romance between prehistoric women and a some roustabout space cowboys, nope far from it. In fact the Venuitian women (who really do not seem very prehistoric at all-more Nordic in fact) never come in contact with the astronauts who invade thier planet and kill thier giant flying lizzard god. The Astronuts never catch on to what they have done and why the mysterious calamaties keep plauging them. So as far as futuristic naughty thrills, forget it...I even think one of the explorers is gay.Nothing specific but just watch the way he behaves as he rides the giant robot out of the lava flow, you'll know what I mean...