Sir George must overcome monsters,ogres and dragons in his quest to find the kidnaped princess. 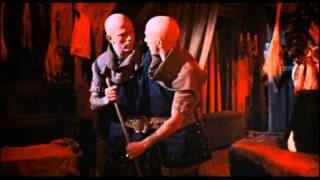 Driven by vengeance, an evil sorcerer (Basil Rathbone) kidnaps a princess vowing to feed the girl to a hideous fire-breathing dragon. The desperate king enlists the bravest knights in the land to free his daughter, promising half his kingdom and the girl's hand in marriage to her savior. George, a simple farm boy who loves the princess, pledges to defeat the vile wizard. In his path are seven deadly curses - perilous challenges and terrifying monsters. As the powerful knights fall prey to an enormous ogre, poisonous swamps and bloodthirsty temptresses, George's courage, wit and fighting prowess lead him to a final horrific confrontation - mortal combat with the murderous magician himself.

The Magic Sword is an epic triumph for director Bert I. Gordon, whose previous credits include The Amazing Colossal Man and Attack Of The Puppet People. Inspired by the great colorful fantasy epics that were so popular at the time, Gordon creates a exciting, mythical landscape for the story.

This fanciful adventure tale about a young knight who sets out to rescue a beautiful princess held captive by an evil dragon, stars Basil Rathbone, Estelle Winwood, and Gary Lockwood. Armed with a magic sword given to him by his sorceress stepmother, George the brave knight begins his perilous journey to rescue the beautiful, enchanting Helene. Along the way, George enlists the help of six knights who he brings back to life from the dead. With the knights by his side, George must outwit Lodec's evil spirit, and beat another knight (also seeking Helene's heart) to the task. But when his magic sword fails him, he learns that love has a magic all its own.

Adventure | Fantasy | Witches And Wizards | Dragons
This product is made-on-demand by the manufacturer using DVD-R recordable media. Almost all DVD players can play DVD-Rs (except for some older models made before 2000) - please consult your owner's manual for formats compatible with your player. These DVD-Rs may not play on all computers or DVD player/recorders. To address this, the manufacturer recommends viewing this product on a DVD player that does not have recording capability.

16%off
The Chronicles of Narnia: The Voyage of the Dawn Treader
$8.40 Super Savings
Add to Cart

Customer Rating:
Based on 3734 ratings.


The Magic Sword is a great family film featuring silly monsters, a damsel in distress, good looking nights and the incomparable Basil Rathbone as the villain who kidnaps young pretty girls for ransom but eventually ends up feeding them to his pet dragon. There is little violence in this film and the monsters are quite silly. I love time period movies, esp. ones about medieval times.

This movie is silly but enjoyable nonetheless. It is an excellent movie for the kids. They truly don't make family films like this anymore and it is a shame. This film is also available on DVD from MGM for a lot more money than the Alpha Video release. There is nothing special about the MGM release so I recommend saving yourself some money and buying the Alpha version rather than the more expensive MGM release. I guarantee your kids will like this film a lot more than any of the awful computer animated garbage put out by the studios these days.

I am on Turner Classic Movies.
Check it out here.
http://www.tcm.com/mediaroom/index.jsp?cid=186977

Definitely one to watch again and again! Movie Lover: the Jax from California -- August, 1, 2004


What a pleasant surprise: innovative special effects, good pace, twists and turns, clever humor, colorful heroes, and dastardly villains. Gary Lockwood as Sir George has surprising screen chemistry with his damsel in distress. Basil Rathbone hams it up as the evil magician. Unfortunately, the dragon appears to be recycled from "Hercules vs the Hydra", minus one head. Keep an eye open for "dragon trainer" in the opening credits!
The tone is mostly light-hearted, though some character fates are too gruesome for very young children. All in all, two thumbs up and three cheers!