The Beast of Yucca Flats

A Russian scientist caught in an nuclear blast is transformed into a hideous monster. 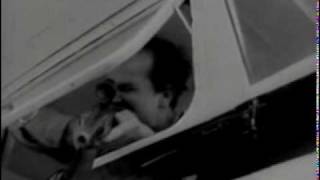 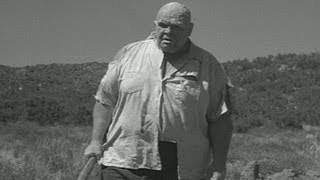 Joe Dante on THE BEAST OF YUCCA FLATS (Featurette)

Soviet scientist's plans to defect are ruined when he is ambushed by KGB agents. The assassins pursue him across a desert wasteland where they are caught at ground zero of a nuclear test site. Although the scientist survives the bomb's detonation, atomic radiation transforms him into a monster. Skin peeling off of his afflicted body, the beast embarks on a violent rampage, killing travelers and kidnapping women. A pair of rangers track the mutant through the corpse-strewn desert with one objective - destroy the killer and end his spree.

The distinctive style of Coleman Francis is perplexing, mind-numbing and yet often (though unintentionally) creepy. Due to budgetary limitations, The Beast of Yucca Flats was filmed without sound, with narration and occasional dialogue added afterwards. Tor Johnson's trademark lumbering only adds to the absurdity and inadvertent humor.

300-pound wrestler Jimmy "Superfly" Snuka plays a noted Russian nuclear scientist chased by Commie spies into the desert where he runs right into an atomic blast and is turned into a hair-eating, club-wielding monster who befriends the local rabbits. Widely considered one of the worst movies ever made, THE BEAST OF YUCCA FLATS has brief nudity at the opening rape scene.

25%off
Santa Claus Conquers The Martians
$5.95 on Sale
Add to Cart

The Killer Shrews
$10
Add to Cart

Customer Rating:
Based on 13423 ratings.


Looks as though this movie was made by amateurs in someone's backyard. So dumb, it can be entertaining.


It seems a lot of people feel that this is a bad film. Perhaps it is, but I prefer to think of it as a "different" film. It's certainly different from most American films of its time in that director Coleman Francis took a European approach, making what is essentially a silent film and adding minimal dialog with ADR. The film cheerfully throws logic and plot away from the very first scene and instead, serves up one of the most surreal and curious experiences in cinematic history. As lost "city boys feed sodapop to thirsty pigs" and a gunman randomly shoots down an innocent man from an airplane, Tor Johnson as Joseph Javorsky (noted scientist) is turned into a beast with terrible skin problems by a nuclear bomb explosion. There is a coyote, a cute bunny rabbit, some cowboy cops, KGB agents and a surly gas station attendant. There is a flag on the moon (where did it come from?) and there is a young married couple (unaware of scientific progress). And don't forget the NUDE (yes a fully nude in 1961) strangulation scene that starts the picture. What it all might add up to I couldn't venture to guess but I'm certain that it is a weirdly entertaining hour of bizzare images and rather gorgeous black and white cinematography. This edition from the incredible folks at Alpha video is the definitive DVD release. Unlike some of the previous releases, this one is unedited and contains the full nude scene. Alpha has also included the original theatrical trailer for the film as well as an extensive catalog art gallery. The cover art for this release is the best of any of the editions I've seen. The print has some minor damage but in most scenes it is near prestine. Certainly this film won't appeal to many people but it is a great example of leftover 50's paranoia. If you are into genuinely odd films, this one is a prime example.


This classic contains some of Tor Johnson's greatest work. Although Dr. Javorsky isn't quite as memorable as Inspector Clay in "Plan 9 From Outer Space" or Lobo in a couple of other Ed Wood epics, he still projects an animal intensity not often captured on the silver screen. The narration is top notch, and I am truly amazed that those Francis kids did not become A-list actors as adults. This rules.


When talking about "bad" directors people usually think of Edward D. Wood, Larry Buchanan or even Bill Rebane. Forgotten among bad directors is Coleman Francis, who helmed the movie I am about to discuss. 57 year old Tor Johnson, former pro-wrestler and sometime actor, plays Prof. Joseph Javorsky a Soviet scientist who has defected to the West to answer the question of how a flag has mysteriously been planted on the Moon. He is pursued by 2 KGB agents with orders to silence him, as in . . .forever! They chase Tor into the A-Bomb test site at Yucca Flats.
Now here is where the movie really gets graet in a "so bad it's good" way. These 2 young men run and run and run but they cannot catch Tor! They also shoot at his 400 lb body from all of 30 feet away and miss! The atomic explosion vaporises the agents but Tor survives, well sort of. Radiation has turned him into the title character. a mutated beast with a half melted face and only animal instincts. For the rest of the picture he scares little boys, kidnaps a woman
and growls a lot. Meanwhile desert cops out to catch the mad killer shoot the wrong person and prove totally incapable of saving anyone!
Despite its ineptitude, or maybe because of it, the film has a charm that is impossible to deny. This was Tor's last feature film. At the insistance of his wife he soon retired. His final film appearance was in the TV series "Bonanza" in an episode called "San Francisco Holiday".