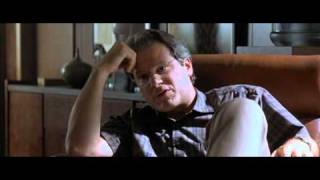 Tricks of the Trade: Making Matchstick Men - follow the director through an intimate day-today account of the filmmaking process

If there's a sucker born every minute, these guys will work the delivery room. Meet Roy and Frank, con men who plan to flimflam a flimflammer out of big-time dough. They have a new partner to help them too: Roy's long-absent 14-year-old daughter, who has entered his life and is eager to learn the art of the con.

Just when you think you have it figured out you don't, during this acclaimed comedy thriller directed by Ridley Scott. Nicolas Cage is winningly quirky as Roy, genius at crime and basket case in life because he's an agoraphobe, a germaphobe and suddenly a parent. Sam Rockwell is wily Frank. And Alison Lohman plays the wild child at Roy's door. For fun, suspense and brain-busting twists, nothing's hotter than Matchstick Men.

Roy Waller (Nicolas Cage) is a con man who has had to overcome enormous problems with obsessive-compulsive disorder in order to stay on top of his game. His partner in crime, Frank Mercer (Sam Rockwell), helps him run a daily business conning housewives out of their money with telephone scams. Frank is frustrated with their small-fry clientele however, and urges Roy to look for bigger business ventures. Roy resists Frank's urges, and instead leads a bizarre existence in which he is completely dominated by his compulsions to clean, eat canned tuna every night, and open his front door three times before he can walk through it. His world is turned upside down, however, when he starts seeing a shrink who helps Roy to get in touch with his missing 14-year-old daughter, Angela (Alison Lohman). Angela soon becomes embroiled in Roy and Frank's scams, pushing Roy to take on a grandiose scheme that could give them financial security for the rest of their lives.

Directed by Ridley Scott, this fast-paced crime drama takes several twists and turns as it works its way towards a surprising conclusion. Cage is perfectly cast as the con artist beset by neuroses and family problems, and has an excellent foil in the younger, more abrasive Rockwell. Weaving a tale of trust, family, friendship and deceit, director Scott utilizes the talents of his actors to delve into complex themes, resulting in a breathtaking film in which nothing can be taken for granted.

Can You Ever Forgive Me?
$8.70 Super Savings
Add to Cart