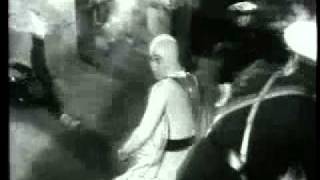 An alien fleet orbits Earth, targeting it for conquest. Mankind is defenseless against the threat of extraterrestrial invasion, but a powerful ally is determined to prevent the impending assault. Sent by the peaceful planet Emerald, Starman possesses the knowledge, strength and bravery necessary to stop the aliens. Discovering a conspiracy involving Earth's top scientists, Starman must race against time to uncover the traitors and prevent a war that will shake the foundations of the universe.

Originating as two episodes of Japanese television series "Super Giant," Attack From Space combines the outlandish visuals of contemporary kaiju films with the steadfast heroics of the "Superman" television series.

Based on episodes of the Japanese television series SUPER GIANT, ATTACK FROM SPACE combines the excitement of a traditional superhero story with classic Japanese kaiju ("giant monster") film action. When alien invaders pose a threat to Earth, just out of reach in orbit around the planet, only Starman can save humanity! Sent to Earth from the allied planet Emerald, Starman uncovers a conspiracy among scientists that requires him to search out those who betrayed the planet before an all-out war begins!

Customer Rating:
Based on 586 ratings.


I really enjoyed this movie. So if it was dumb.
It has real good imagination. I just Love dumb
old B-Movies.


Terrific old Japanese superhero space opera film, from the studio Shintoho, around l958-9. Re-packaged and released in the US in the mid-60's it's one of four "movies" culled from a longer series of episodic films. The FX are dated, the sets cheesy, but the action is non-stop, and what fun this film is!!!! This film, and it's companions(Evil Brain from Outer Space, Invaders From Space and Atomic Rulers of The World) all were staples of late night,mid-l970's UHF TV, a time truly gone by. This film is mostly forgotten now,in that context, but it was only ever seen on 16mm in this country and on fuzzy UHF stations-that said -the DVD is the best you will be able to get. The dubbing cast are all familiars such as Peter Fernandez, Corrine Orr and others(heard in such JApanese import anime shows as SPEED RACER) Even in Japan, these films are obscure at best, I highly recommend this just because it's so wonderfully nostalgic!!!!!