History is about to be rewritten by two guys who can't spell. 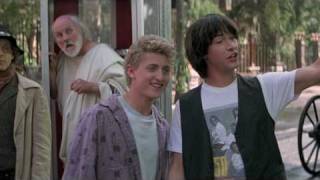 Before meeting Socrates' Bill and Ted read up on his philosophy, " 'The only true wisdom consists of knowing that you know nothing.' That's us dude." "Oh. Yeah."
- Bill to Ted (Alex Winter and Keanu Reeves, respectively)

The excitement and fun begin when a trio of interplanetary rulers dispatch a cool hipster from the 27th century to send two teenage boys - who should have been studying history instead of playing rock music - on a trip through time and history.

Two brain-dead California teenagers, with a combined vocabulary of approximately 75 words, travel back in time to corral various historical figures for a class presentation that just might keep the pair from failing history "most heinously." Napoleon, Socrates, Billy The Kid, Sigmund Freud and Mozart are among those who journey forward in time with the duo in order to give the youth of California eye-witness accounts of the "awesome" pageant that is world history. Most excellent.