A struggling but resourceful woman works her way up the social ladder and reaches the pinnacle of polite British society during the Napoleonic era. 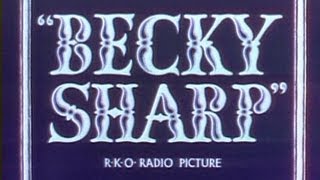 In the years just preceding Waterloo, best friends Amelia Sedley (Frances Dee) and Becky Sharp (Miriam Hopkins) graduate from Miss Pinkerton's Academy for Girls. The wealthy Amelia invites the penniless Becky into the bosom of her family home while the manipulative Becky plots her climb up the social ladder. Entirely lacking in scruples and unhampered by conscience or morality, Becky ascends to the very pinnacle of society, crushing anyone who stands in her path.

Set against the backdrop of the Napoleonic Wars, Rouben Mamoulian's adaptation of Thackeray's epic novel Vanity Fair was the first film to be produced in three strip Technicolor.

The first Technicolor feature is a loose adaptation of Thackeray's VANITY FAIR. Something of a gold-digger, little orphan Becky sets her cap for Joseph Sedley, the wealthy brother of her best friend Amelia. But even the dull-witted Joseph realizes that his family would not smile upon such a union and so never proposes. Frustrated, Becky leaves the Sedley household, and, using her brains, beauty and charm, claws her way into the upper class. Rather tough going, but worth seeing (particularly the recently restored version) a watershed movie moment. Academy Award Nominations: Best Actress--Miriam Hopkins.

This adaptation of William Makepeace Thackeray's novel "Vanity Fair" made cinema history as the first feature film shot in Technicolor.
The story, which vibrantly details the manners and morals of 19th century English society, follows the rise and fall of one Becky Sharp. Though a poor orphan, Becky has grand dreams -- and hopes that a good marriage will assure her fortune. In particular, she has her eye on Joseph Sedley, the wealthy brother of her best friend Amelia. But even the dull-witted Joseph realizes that his family would not smile upon such a union and so never proposes. Frustrated, Becky leaves the Sedley household where she has resided, and using her brains, beauty and charm, proceeds to claw her way into the upper class. But a crucial miscalculation nearly costs her everything...

18%off
Murder on the Orient Express
$10.60 Super Savings
Add to Cart