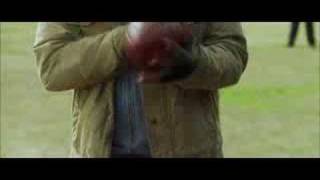 Based on the true story of the first female quarterback to play in a Pop Warner football game, THE LONGSHOTS is an inspiring underdog story of personal triumph and small-town values. The film opens in down-on-its-luck Minden, Illinois, where 11-year-old Jasmine Plummer (Keke Palmer) copes with the pain of an absentee father and her classmates' constant antagonism. Jasmine's fortunes begin to change with the emergence of her uncle, Curtis (Ice Cube). Once a rising football star but now out of work, Curtis dreams of escaping Minden for the sunny promise of Miami. But when he sees Jasmine's gift for throwing the football, Curtis helps her overcome self-doubt and skepticism to join Minden's woeful Pop Warner team. Inspired by Jasmine's skill and toughness, and with the addition of Curtis as a coach, the team earns a spot in the Pop Warner Super Bowl in Miami. But as the national media swoop in to cover the team's story, Jasmine and Curtis come face-to-face with their biggest obstacle: the reappearance of Jasmine's father. Will Curtis and Jasmine lead the team to glory, or will Jasmine's father once again tear apart a loving family' Directed by Limp Bizkit front man Fred Durst, the film features excellent performances by Ice Cube and Keke Palmer (AKEELAH AND THE BEE), the youngest person ever nominated for a Screen Actors Guild award. Grounded in real struggles and real people, THE LONGSHOTS eschews typical Hollywood theatrics to tell an ultimately authentic tale of overcoming great odds by finding greatness in ourselves and each other.

60%off
The Mavericks
20th Century Masters: Best of - The DVD Collection
$3.18 Spring Sale
Add to Cart