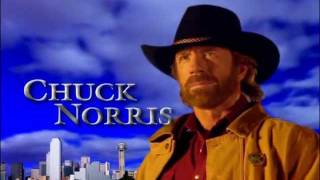 Martial arts star Chuck Norris made his transition to the small screen with the action-packed television drama WALKER TEXAS RANGER. Lasting for nine seasons, the series followed the crime-fighting adventures of tough-guy Texas Ranger Cord Walker (Norris) as he brought justice to the streets of Dallas with a well-placed karate chop to the city's more nefarious criminals. Walker's unconventional interrogation methods clashed with his computer-expert partner, Jimmy Trivette (Clarence Gilyard), and the by-the-book county D.A., Alex Cahill (Sheree Wilson), who also functioned as Walker's love interest. This collection presents the series' sixth season, in which the redheaded lawman continues trouncing bad guys and creeps ever closer to popping Alex the question.

Texas Ranger Cordell Walker, one of the last old-fashioned heroes in the West, is a protective friend but a relentless foe who will stop at nothing to bring a criminal to justice.
Source - Paramount Home Entertainment