Hedy Lamarr plays a shrewd conniving woman who, in her search for love, destroys everything in her path. 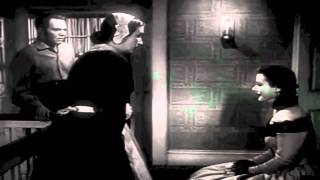 Beautiful and sensuous screen legend Hedy Lamarr is an ill-treated waif out to better herself by any means necessary in Edgar G. Ulmer's lavish costume drama about passion, class and culture in frontier era America.

Gorgeous Jenny Hager (Hedy Lamarr) suffers from poverty and the abuse of her drunken father in the bustling port town of 1830's Bangor, Maine. The town elders place the girl in the home of wealthy aging businessman Isaiah Poster (Gene Lockhart) who comforts the the girl, first as a father, then as a husband. Jenny immediately begins to seduce her new stepson, Ephraim (Louis Hayward), who has loved her since childhood. Heartlessly playing father against son, she effectively destroys both men and emerges as the richest and most powerful woman in the community. Her dead husband is barely cold in the grave when the calculating widow turns her attentions to her handsome foreman, John Evered (George Sanders), and his sweet young fiancee (Hillary Brooke), whose engagement is the next victim of her cruel and lustful intentions. Emerging as a pillar of society with a new young husband, Jenny has no idea of the shocking fate which awaits her.

Hedy Lamarr is very alluring in this sordid romantic saga based on the book by Ben Ames Williams. She plays Jenny, a lusty, sociopathic lass in the wilds of 18th Century Bangor, Maine, who uses her beauty to snare a local, rich, middle-aged businessman (Gene Lockhart). She then seduces his weak-willed son (Louis Hayward) and later goes after John (George Sanders), a tall, dark, handsome woodsman engaged to her friend, Mae (Hillary Brooke). For a period piece made in the 1940s, this film is briskly paced, action-packed, and unusually erotic, courtesy the assured direction of low-budget genius Edgar G. Ulmer (DETOUR, BLUEBEARD) in one of his rare big-budget projects. Highlights include a forbidden embrace amid a raging lightning storm, and Jenny allowing herself to be beaten by her alcoholic father (Dennis Hoey), and then showing off her whip marks to arouse Mr. Poster. ALL ABOUT EVE fans will delight in seeing their Addison De Witt (Sanders) looking uncomfortably overeducated in the part of a robust New England woodsman.

Vintage | Racy | Theatrical Release
This product is made-on-demand by the manufacturer using DVD-R recordable media. Almost all DVD players can play DVD-Rs (except for some older models made before 2000) - please consult your owner's manual for formats compatible with your player. These DVD-Rs may not play on all computers or DVD player/recorders. To address this, the manufacturer recommends viewing this product on a DVD player that does not have recording capability.

Customer Rating:
Based on 2139 ratings.

What happens when you give Edgar G. Ulmer a budget? Movie Lover: George Willeman from Springfield, OH US -- July, 9, 2005


You get a film whose "heroine" makes Scarlett O'Hara look like a sunday school teacher! Hedy Lamarr is so gloriously evil and manipulative in "The Strange Woman." Director Edgar G. Ulmer got a break from his usual "poverty-row" productions (ie, "Detour") and got to throw a little money around on this production. His handling of Hedy's character--one moment scheming, the next fragile and fainting--makes this a great and sadly forgotten film. The print quality is ok on this DVD--a bit too contrasty in places and there are a couple transfer anomilies that are distracting. I believe this DVD may have come from a print prepared to make French language prints as at one point, the soundtrack goes completely dead and a church signboard that comes up is in French. The story takes place in Bangor, Maine, and I don't think they were bilingual, then or now. One last note--it's great to see the wonderful Hillary Brooke playing a genuinely nice character. The three male leads, Gene Lockhart, Louis Hayward, and George Sanders (also playing a genuinely nice person!), help round out an excellent cast.