Just because you're invited, doesn't mean you're welcome. 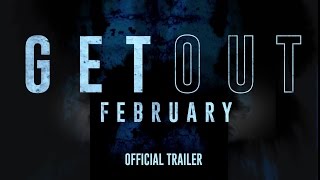 Get Out - In Theaters This February - Official Trailer 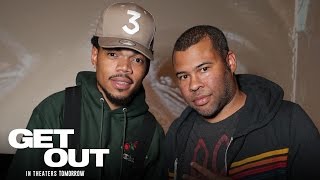 Get Out - In Theaters Friday - Chance the Rapper Special Screening (Featurette)

RogerEbert.com - 01/24/2017
3 stars out of 4 -- "GET OUT feels fresh and sharp in a way that studio horror movies almost never do. It is both unsettling and hysterical, often in the same moment..."
A.V. Club - 02/23/2017
"The film works so well as a gauntlet of social horror that Peele almost didn’t need the more traditional thriller elements he introduces in the third act..." -- Grade: B+
Los Angeles Times - 02/23/2017
"[A] satirical horror-thriller perfectly tailored to our post-postracial moment..."
Chicago Sun-Times - 02/22/2017
"[T]he real star of the film is writer-director Jordan Peele, who has created a work that addresses the myriad levels of racism, pays homage to some great horror films, carves out its own creative path, has a distinctive visual style -- and is flat-out funny as well."
Entertainment Weekly - 02/22/2017
"Peele is undeniably a born filmmaker with big ambitions....He’s made a horror movie whose biggest jolts have nothing to do with blood or bodies, but rather with big ideas." -- Grade: B
Rolling Stone - 02/22/2017
3.5 stars out of 4 -- "A jolt-a-minute horroshow laced with racial tension and stinging satirical wit....This socially aware scary movie takes you by surprise, setting the scene for a slasher flick that's a ticking timebomb."
New York Times - 02/23/2017
"In GET OUT, an exhilaratingly smart and scary freakout about a black man in a white nightmare, the laughs come easily and then go in for the kill."
Boston Globe - 02/23/2017
"It is not only the best horror film since UNDER THE SKIN, but a subversive and often hilarious commentary on race as well."
Washington Post - 02/23/2017
3.5 stars out of 4 -- "The shocks and the laughs are thoroughly entertaining, but it’s the truth of GET OUT that’s so real."
Empire - 03/16/2017
4 stars out of 5 -- "[I]t’s a highly effective horror movie....[Peele] is one of the most exciting new directing voices we’ve seen in a while."
The Guardian - 03/19/2017
4 stars out of 5 -- "Sharply written by Peele, GET OUT is at its best when hinting at horrors hidden beneath the genteel facade."
Film Comment - 03/03/2017
"GET OUT is the horror film that we’ve been waiting for. It arrives just in time, at a moment when genre filmmaking can harness familiar tropes to reflect a post-election world that feels increasing surreal, backward-looking, and unfamiliar."
USA Today - 12/26/2017
"Wielding biting commentary, the movie manages to be funny, disturbing and rousing all in one."

A young African-American photographer (Daniel Kaluuya) is nervous at the thought of meeting his white girlfriend's parents (Catherine Keener and Bradley Whitford) for the first time during a trip to the latter's country estate. However, his anxiety soon turns into outright terror when he discovers that the family's seemingly idyllic community is hiding a sinister conspiracy, one that involves the disappearance of several black people in the area. Jordan Peele, one half of the comedic duo KEY & PEELE, makes his directorial debut with this horror thriller. Allison Williams, LaKeith Stanfield, and Caleb Landry Jones co-star.

Dr. Strangelove Or: How I Learned to Stop Worrying and Love...
$12.50 Super Savings
Add to Cart