Centuries before the exploration of space, there was another voyage into the unknown. 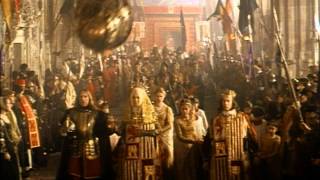 "Life has more imagination than we carry in our dreams."
- Quote at end of the film

USA Today - 10/09/1992
"...1492 aces all of its New World visual elements..."
Chicago Sun-Times - 10/09/1992
"...Ridley Scott is a visually oriented director who finds great beauty in his vision of the New World....A satisfactory film. Depardieu lends it gravity, the supporting performances are convincing, the locations are realistic..."

Gérard Depardieu stars as Christopher Columbus in director Ridley Scott's epic film that chronicles the explorer's voyages and tribulations. Obsessed with his vision of pursuing a western route to Asia, in 1492, Columbus petitions Isabella (Sigourney Weaver), the Spanish queen, to fund his voyage, and with the help of her treasurer, Sanchez (Armand Assante), he finally succeeds in gaining her backing. Setting off in three ships, Columbus plies uncharted waters for weeks on end until his crew, exhausted and near starvation, threatens to mutiny. But the explorer rallies the men with an impassioned speech about the importance of the mission, and shortly thereafter they land in the New World. The crew establishes amicable relations with the native people, and Columbus leaves some of his men behind on his return to Spain, where he is greeted as a hero by the queen, eager to know what he has found. Upon his return to the New World, Columbus finds that a number of his crew have been killed, but insists on treating the Indians humanely, establishing a colonial government. Yet the colonists' relations with the Indians continue to worsen, and Columbus is recalled by Isabella. In a film that features Scott's typically breathtaking photography, the scene of Columbus's arrival at the fog-enshrouded New World is especially notable.

Ridley Scott's 1492: CONQUEST OF PARADISE is an epic story of the visionary mariner who set a stifled Europe free and brought mixed blessings to the New World. This intelligent and learned film portrays Columbus without indulging in modern politics, cynicism, or undue romanticism.