It's more than a haircut 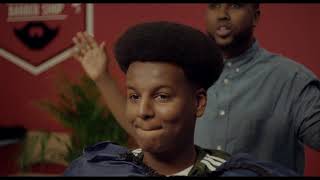 Tim Story's BARBERSHOP is a lighthearted, crowd-pleasing romp that takes place over the course of one day in and around a south side Chicago barbershop. The owner of the struggling establishment, Calvin (Ice Cube), presides over his raucous staff like his father and grandfather did before him. There's the aging, politically incorrect Eddie (a show-stealing Cedric the Entertainer), the pretentious Jimmy (Sean Patrick Thomas), the ex-con Ricky (Michael Ealy), the fiery Terri (Eve), the white, unappreciated Isaac (Troy Garity), and the poetry-loving Dinka (Leonard Earl Howze). As the local police search for the criminals who stole an ATM from the deli across the street (the hysterically pathetic Anthony Anderson and Lahmard Tate), Calvin contemplates selling the barbershop to a menacing loan shark (Keith David). When it appears that a deal has been made, Calvin realizes the error of his ways and tries to rectify the situation before it's too late.

With BARBERSHOP, Ice Cube is well on his way to establishing another cinematic franchise (following in the steps of the FRIDAY series). Using the universally identifiable backdrop of a barbershop, the film bounces between drama and action and comedy with easy assurance. If ever there was a film that deserved a sequel, this is it.