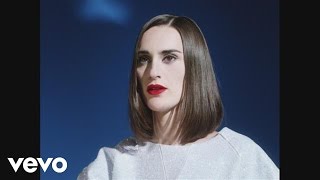 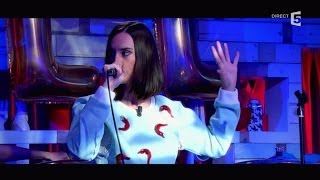 Paste (magazine) - "As ever, she proves herself a versatile singer, allowing for a softness to curl around the edges of her voice, especially on the second half of the album where she opts for a harder edge..."

After two albums of blindingly fun, so far out in left field you need binoculars to find them pop, the duo of Julie Budet and Jean-Fran‡ois Perrier, better known as Yelle, turned to pop hitmaker Dr. Luke and his team of craftsmen to help them prepare their third album, ComplŠtement Fou. At first the pairing seems a bit mercenary, but Dr. Luke sought them out instead of the other way around. Like many other people, he was drawn to Yelle's brightly colored, insanely catchy dance-pop, enough so that he signed them to his label. Instead of changing their approach drastically and trying to turn them into another cog in the pop machine, the Doc and his team merely work to sharpen the duo's sound, giving the hooks more space to sink in and maybe tightening up some of the loose parts. Budet's sassy, brassy vocals aren't altered; neither is the duo's amalgamated style that brings in elements of hip-hop, synth pop, house, and '80s dance-pop, then whips it up into a frothy, Technicolor cocktail. The duo don't change much of anything from Safari Disco Club, or Pop-Up either. The best songs here, like the fist-pumping jam "Moteur Action," the swaggering title track, and the funkily robotic "Toho," are the equal of anything on either of those two records. There's even a steamy outer space R&B-influenced ballad here, "Bouquet Final," which is one thing Safari was missing. Another new wrinkle is the lightly skipping, melancholy "Florence en Italie," which has a nice sad Gwen Stefani circa "Cool" feel to it. Maybe a couple songs bear Dr. Luke's influence a little, like the feather-lite disco confection "Coca Sans Bulles," which sounds like the theme to the best Disney Channel show ever, but any fears that he would ruin things ends up being unfounded. It's still good-time music par excellence, done with style and a healthy amount of zip. Yelle are still making perfect pop music for people who don't care if their pop music hits the charts, or even wants to, and ComplŠtement Fou may be the duo's best record yet. It is certainly their most well-rounded and diverse, one that adds some pop-machine savvy without losing any of the insouciant charm they've had to spare in the past. ~ Tim Sendra