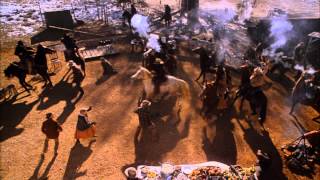 As the result of a chance meeting, four cowboys on horseback are drawn together to defeat a corrupt frontier sheriff and his vicious posse. An enjoyable high-spirited western. Starring Kevin Kline, Danny Glover, Brain Dennehy and Rosanna Arquette, and written and directed by Lawrence Kasdan (THE ACCIDENTAL TOURIST). Academy Award Nominations: Best Sound, Best Original Score.

Get ready for some horse-ridin', gun-totin', whiskey-drinkin' fun in this digitally remastered collector's edition of Lawrence Kasdan's SILVERADO, featuring a never-before-seen featurette with interviews from the cast and the filmmakers! The spirited Western stars Kevin Kline, Scott Glenn, Kevin Costner, and Danny Glover as four unwitting heroes who cross paths on their journey to the sleepy townof Silverado. Little do they know the town where their family and friends reside has been taken over by a corrupt sheriff and a murderous posse. It's up to the sharp-shooting foursome to save the day, but first they have to break each other out of jail, and learn who their real friends are. Thanks to its authentic look and spectacular cast, which also includes Rosanna Arquette, John Cleese, BrianDennehy, Jeff Goldblum, and Oscar(r)-winner Linda Hunt (1983 Best Supporting Actress, The Year of Living Dangerously), this exciting Old West adventure created a whole new generation of Western fans and earned its "modern classic" status.

Four cowboys join forces in the Old West to combat injustice in "Silverado", director Lawrence Kasdan's loving ode to the Western. Emmett, a quiet loner, saves Paden from sure death in the desert, where a band of outlaws had abandoned him. They then befriend Mal, a black cowboy who was denied service at a saloon, and all three move on to rescue Emmett's hot-headed brother from being hanged. The quartet finally reach their destination, Silverado, where they must make a stand against the corrupt sheriff and the band of murderous ranchers who have dogged them their entire journey.

The Quick and the Dead
$9 Super Savings
Add to Cart