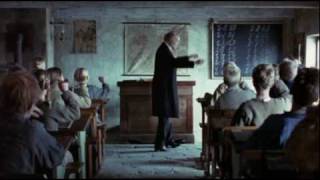 PELLE THE CONQUEROR is based on the first of the four volumes of Martin Andersen Nexo's epic novel. Talented Danish director Bille August focuses on Pelle when he and Lasse find work at Stone Farm. After being humiliated by the farm's young trainee manager, Pelle is disappointed when Lasse does not stand up for him. Pelle admires Eric, an older immigrant who is not cowed by the farm manager and who dreams of going to America. He watches as an affair develops between Anna, an immigrant worker, and Nils, son of a local dignitary, and sees the affair's tragic outcome. Pelle's friend Rud fails his school exams, then runs away. Through Pelle, Mrs. Olsen, whose sailor husband is lost at sea, becomes interested in Lasse. Pelle observes the drinking of Mrs. Kongstrup, wife of the farm's owner, and the philandering of her husband. He sees Mrs. Kongstrup's niece, the lovely Sine, arrive and witnesses the disastrous consequences of her visit. At the center of these events is the striking young Pelle Hvenegaard. It is his face that August focuses on, his mind that is forming right onscreen, as Pelle observes and reacts and learns and, then, moves on alone.

Early-20th-century Denmark. A boat arrives in the morning mist. Among the hopeful immigrants from Sweden looking for work are Lasse Karlsson (Max von Sydow) and his son, Pelle. Lasse is a sad man: beaten down by life; struggling with the loss of his wife; wanting to stand up for his son but afraid of authority; and finding relief in the bottle. Max von Sydow received a well-deserved Oscar nomination for his fine performance as Lasse, but PELLE THE CONQUEROR is not his film--instead it belongs to the remarkable 12-year-old, Pelle Hvenegaard, who plays Pelle himself.