Alice and the rest of the staff of Mel's are back for a second season of sweet and savory comedy. 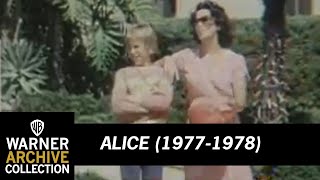 As the second season of the break-out hit "Alice" graced the nation's airwaves, Mel's Diner soon became the nation's dining destination of choice. Thanks to its hearty combination of down-home eccentrics, sweet sentiment, blue-collar ethos, and the spice of edgy topicality, "Alice" proved a dish the nation could not resist. With the central flavorings of Alice (Linda Lavin), Flo (Polly Holliday), and Vera (Beth Howland) rooting the comedy, and Mel (Vic Tayback) and Tommy (Philip McKeon) on hand to balance the distaff waitstaff with curmudgeonly charm and youthful enthusiasm, "Alice" was cooking with gas and ready to serve up some sit-com gold in season 2, as the staff faces working holidays, dispossessed natives, divine stars, and the specter of Mel's fiftieth.