The men she loved lived to love no others! 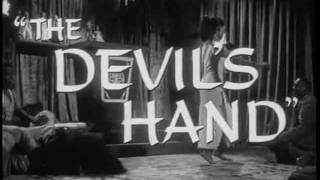 A sinister coven of devil worshippers uses the charms of a beautiful woman to lure men into their unholy death cult. Rick begins dreaming of a temptress, a lovely but deadly vixen named Bianca. When he discovers she really does exist, he is drawn to her through supernatural forces and discovers that she is part of a strange sect that worships the devil god Gamba. He is initiated into the group and is soon caught in a web of human sacrifice and horrifying rituals. Meanwhile, Rick's fiancee, Donna, is growing increasingly concerned over her husband-to-be's strange behavior. Using the power of voodoo, the coven snares the innocent girl into becoming their next sacrifice. Rick must somehow fight the satanic powers of Bianca and save Donna from the clutches of the hellish cult.

Unraveling a tale of occultism and pagan worship that had been the subject of only a handful of previous movies like Val Lewton's The Seventh Victim or Jacques Tourneur's Curse Of The Demon, The Devil's Hand (aka Devil's Doll and Live To Love) is a rarely-seen supernatural thriller ripe with unnerving suspense. The film's star, Linda Christian (aka Blanca Welter), was the first Bond girl, appearing in a 1954 TV version of Casino Royale. She is also the real-life sister of co-star Ariadna Welter. Ariadna's role in The Devil's Hand marked her only U.S. film appearance, but she is well known to Mexican horror movie fans as a scream queen from The Brainiac, The Vampire and The Vampire's Coffin. Robert Alda was far better known for his Broadway work than his film efforts, which included the chillers The Beast With Five Fingers and House Of Exorcism. Director William Hole, Jr.'s genre credits include The Ghost Of Dragstrip Hollow. He also worked on the 1976 TV-series "The Bionic Woman." Jack Pierce, famed classic Universal monster make-up genius, also handled the face powder on this picture.

Robert Alda stars as a man who becomes entranced by the beautiful high priestess of a voodoo cult. Totally bewitched, he realizes that he has to break his own spell when his fiancee is kidnapped and slated to be sacrificed.

Demonic Possession | Ghosts | Witches And Wizards | Theatrical Release
This product is made-on-demand by the manufacturer using DVD-R recordable media. Almost all DVD players can play DVD-Rs (except for some older models made before 2000) - please consult your owner's manual for formats compatible with your player. These DVD-Rs may not play on all computers or DVD player/recorders. To address this, the manufacturer recommends viewing this product on a DVD player that does not have recording capability.

Customer Rating:
Based on 1154 ratings.


Although Alan Alda`s dad made far better films than this, I`ll bet he never engaged in such passionate love scenes( especially for the early sixties) as those with siren Linda Christian.You`ll recognize Neil Hamilton (commisioner Gordon, from the original "Batman" TV show from 1966)as a truly ghoulish Satanist.Not great but worth checking out.