A down-and-dirty cop is obsessed with stopping a powerful mobster in this remarkable classic film noir. 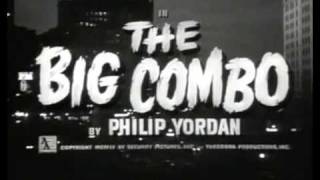 Photographed by legendary master of sinister shadows, John Alton (I, the Jury; He Walked By Night; The Lady and the Monster), The Big Combo is shocking and hard-boiled Hollywood noir, and not for the faint of heart.

Shocking cruelty and explosive performances by Wilde and Conte make this a favorite of film-noir cultists. The plot revolves around Wilde's determination to smash the rackets with the help of the gang boss' ex-girlfriend. As in this outing, director Lewis's deft use of low budgets made him a critical favorite.

Action | Thieves | Organized Crime | Cops | Film Noir | Police | Theatrical Release | Crime
This product is made-on-demand by the manufacturer using DVD-R recordable media. Almost all DVD players can play DVD-Rs (except for some older models made before 2000) - please consult your owner's manual for formats compatible with your player. These DVD-Rs may not play on all computers or DVD player/recorders. To address this, the manufacturer recommends viewing this product on a DVD player that does not have recording capability.

25%off
Kansas City Confidential
$5.95 on Sale
Add to Cart

Customer Rating:
Based on 9060 ratings.


What a classic noir thriller!

This crime gem features an amazing performance of unbridled sadism by the great Richard Conte as syndicate head Mr. Brown. Conte was one of cinema's best yet underrated tough guys, and in "The Big Combo" he really shines. It is without question his best gangster role. Brian Donlevy likewise turns in a super performance, a complex role as the despicable yet oddly sympathetic one-time Combination big shot, now reduced to playing Conte's "yes man".

As gangster films go, "The Big Combo" is at the top of the list - providing a dark, perverse storyline featuring a determined but flawed hero (Cornel Wilde), a troubled dame (Jean Wallace) who is the object of Wilde's obsession, and two mob enforcers (Lee Van Cleef and Earl Holliman) who share more than a little affection between them. Rounding out the cast is Robert Middleton, adding authority in one of his rare good guy roles.

The film is highlighted by many memorable scenes and innuendos that were considered quite daring for the time.

Director Joseph H. Lewis was a master of the crime genre, having previously helmed the classic "Gun Crazy" (1950). But I feel that "The Big Combo" stands as his best work, as it certainly oversteps the cliches often found in crime dramas - even in its depiction of cop vs. hood.

Brutal, taut and exciting, "The Big Combo" is a must for all fans of film noir!