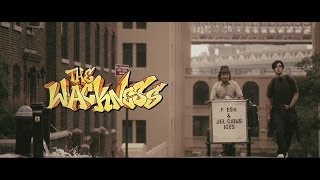 Palpable heat, complete with sweltering lens flares, washes over the mental and emotional currents of writer-director Jonathan Levine's THE WACKNESS. As the summer months of 1994 pass in three naturally marked acts, the neon pop of a pained youth culture's graffiti art punctuates Mayor Rudolph Giuliani's New York City and its palette of washed-out darks and midtones. This part-familiar, part-engagingly new coming-of-age story suggests the Giuliani administration's "cleaning up" of the city as a metaphorical model of how not to approach the pain of living. The philosophical critique of sweeping the ugly under the rug, seeing it as nothing but a disservice to oneself, comes courtesy of the advice and attempted practice of gonzo-druggie psychiatrist Dr. Squires (Ben Kingsley) and the struggle of his teenage pot-dealing patient, Luke Shapiro (Josh Peck). The only way to live life, says Squires, who accepts marijuana as payments for Luke's therapy sessions, is to embrace it in all its excruciating throes.

THE WACKNESS is an appropriately self-aware dark comedy that separates itself from coming-of-age films set in earlier eras by pointing to its own genre's conventions (through blunt articulation and express devoicing, alternately) as much as it does its themes and sentiments. Peck delivers a layered performance as Luke. The laconic stoner's heavy-lidded, steely stares and draggy attempts to be cool, and his statements that sound like questions at vulnerable moments ("I got this for you, yo," he says shyly in his white-boy hip-hop intonation as he hands a gift to Squires's stepdaughter Stephanie, the girl he's fallen in love with), are belied by a natural intelligence and a growing anxiety. Incidentally, beautiful Manhattan native Olivia Thirlby (JUNO) is perfect as dream girl Stephanie. All this feverish imagery is emotionally enveloped by THE WACKNESS's ‘90s hip-hop soundtrack, which features the Notorious B.I.G. and A Tribe Called Quest.

New York, summer 1994, the greatest year in hip-hop, a troubled teenage drug dealer trades pot for therapy sessions with a drug-addled psychiatrist intent on living his life to the fullest. The two form an unlikely friendship, but things get complicated when the kid falls for the doctor's daughter.

The Rules of Attraction
$8.70 Super Savings
Add to Cart

60%off
Confessions of An American Girl (DVD)
$3.98 Spring Sale
Add to Cart