Rolling Stone: 3.5 stars out of 5 -- "Taylor's supple baritone remains a wonder of intimacy, and it finds its match in the effortless intricacy of his fingerpicking." 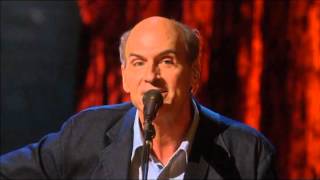 Rolling Stone - p.194
3.5 stars out of 5 -- "Taylor's supple baritone remains a wonder of intimacy, and it finds its match in the effortless intricacy of his fingerpicking."
Uncut - p.93
3 stars out of 5 -- "[T]his is an effective summary of Taylor's life and work....Taylor's performance throughout is immaculate but full of warmth..."

Personnel: Larry Goldings (piano, harmonium, organ, keyboards, synthesizer).
Audio Mixer: Dave O'Donnell .
Liner Note Author: James Taylor .
Illustrator: James Taylor .
Photographers: Hilary Scott; Todd Moser.
With ONE MAN BAND, James Taylor becomes the third major musical icon, after Paul McCartney and Joni Mitchell, to sign with the Starbucks-affiliated music label Hear Music for a new releases. Unlike Mitchell and McCartney, Taylor is using his fresh start to take a well-deserved retrospective look over the course of his career. ONE MAN BAND is a two-disc set incorporating a live concert and a documentary DVD. The DVD is an exhaustive work directed by filmmaker Sydney Pollack that mixes new live concert material and interviews with rare archival footage, including both vintage television appearances and, appropriately for a documentary about an artist who has treated his musical career as a lifelong running autobiography, home movies and personal photographs. True to the album's title, the live concert on the CD features just Taylor's warm, mellow voice and his soulful, folk-influenced acoustic guitar. Recorded live in front of a hometown crowd in the hills of western Massachusetts, these 19 songs stretch back over 40 years, all the way to his first single, "Something in the Way She Moves," and include fine renditions of all his most beloved songs as well as several wry anecdotes about them. ONE MAN BAND is an intimate portrait nicely executed.

James Taylor
At Christmas
$11.98 on Sale
Add to Cart

James Taylor
Other Covers
$20.69 on Sale
Add to Cart

Alison Krauss
A Hundred Miles Or More: Live From The Tracking Room
$19
Add to Cart
(30+)