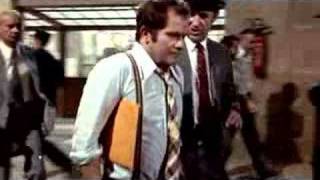 Gene Hackman stars as hard-boiled New York narcotics cop Popeye Doyle in the sequel to the Oscar-winning FRENCH CONNECTION. Still on the trail of heroin kingpin Charnier (Fernando Rey), whom he's dubbed Frog One, Doyle heads for Marseilles. On arrival, his aggressive ugly-American persona alienates French inspector Barthelmy (Bernard Fresson), and his limited ability to speak French doesn't help. Frustrated by Barthelmy's lack of progress, he slips his assigned police protection and goes looking for Frog One on his own. He's soon captured by Charnier's minions, who lock him in a fleabag hotel and shoot him up repeatedly with free samples of their product until Doyle is completely addicted. Charnier uses the detective's narcotized state to interrogate him and is surprised to find that he's virtually ignorant about his operation. The disdainful Charnier has him dumped in front of police headquarters, and Barthemy arranges for him to be put in isolation. Doyle undergoes the lengthy, grueling ordeal of quitting heroin cold turkey while his desperation to capture Charnier builds inside him. Hackman's brilliant performance highlights this somewhat overlooked sequel; Claude Renoir's camera fully captures the squalor of the milieu, and Frankenheimer engineers a harrowing final chase.

Gene Hackman returns in his Oscar award-winning role as the hard-hitting detective Popeye Doyle. Doyle travels to Marseilles in pursuit of the heroin dealers who he hit, but failed to kill in New York. In the south of France, he is kidnapped by the dealers and forced to become as addict in captivity. But Popeye is too tough to be beaten and when he is finally set free, he quits the junk cold turkey and undergoes an agonizing withdrawal. After he comes clean, he goes after his enemy Charnier, the heroin dealing king pin, played by Fernando Rey. He burns down the hotel where he was held hostage, survives a shootout and finally does away with his enemies once and for all. With its tension-filled action, inspired chases, inexhaustible excitement and Hackman's superb performance, French Connection ll is every bit as good, if not better, than the original.