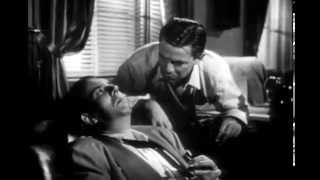 Yul Brynner (with a full head of hair) made his feature film debut as the villain in PORT OF NEW YORK. Brynner stars as a vicious drug kingpin who specializes in outsmarting the police. But after the body count connected to his operation starts to mount, the police double their efforts to end his smuggling scheme, risking one of their own in a treacherous undercover operation. PORT OF NEW YORK is an overlooked police procedural made a couple of years after the more well-known T-MEN, and both stand as forerunners to television programs like DRAGNET. The film features the high contrast black and white photography common to crime and police films of the period (the genre aesthetic later dubbed "film noir") as well as some remarkable location shooting featuring an extraordinary look at 1940s New York.

This gritty urban drama focuses on two agents out to bust a narcotics gang. The criminals succeed in smuggling drugs into the country thanks to corrupt agents whom they later murder.
At first, the detective can find nothing on these murderous creeps. Eventually, however, the agents succeed in finding the criminals, and in infiltrating their ranks.
Will the feds bring the mobsters to justice' Or will the smugglers discover the agents' true identities first'

The Velvet Touch
$19
Add to Cart

Customer Rating:
Based on 1191 ratings.


Definetly a cut above many films of its type. For a native New Yorker, seeing the city of 60 years ago (3rd Avenue el included) is quite a treat. And even more so is seeing 29 year old Yul Brenner in his first film, complete with an (almost) full head of hair. Fun to watch!