Driven to extinction. Back for revenge.

Currently Out of Stock: We'll get more as soon as possible
Notify Me When Available
Add to Wishlist
Format:  DVD
sku:  SUR 20444D
Our customers love us! 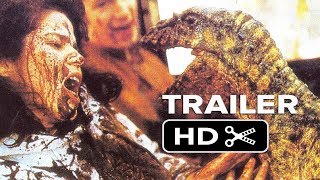 "Just find it. Tonight! I told you, you'll recognize it when you see it." (Jesse Paloma, Plant Manager)
"Either there's more than one, or else it's growing,... growing real fast." (Dr. Raven to Sheriff)
"Chickens. Chickens. She was working on chickens." (Corporate type to head of ARPA)
"The earth was not made for us. She was made for the dinosaurs. The earth was scaled to their dimensions. Human beings are ants crawling through their living rooms." (Dr. Jane Tiptree)

After being driven to extinction, great bloodthirsty dinosaurs come back to life with the assistance of a demented genetic scientist (Diane Ladd). She plans to replace the human race with a super-race of dinosaurs who will not pollute the planet. This campy creature-fest delivers the B-movie goods with a sharp script, a series of effective special effects, and a manic performance by Ladd.

A mankind-hating scientist does a little genetic engineering to produce a brood of very hungry dinosaurs.