112K ratings
Currently Out of Stock: We'll get more as soon as possible
Notify Me When Available
Add to Wishlist
Format:  Blu-ray  (2 Discs)
sku:  X728
Also released as:
Appaloosa for $6.40
More products that might interest you:
Classic Western Collection: 20 Full Color Vintage Movie Postcards (Movie Collectible) $4.78
Our customers love us! 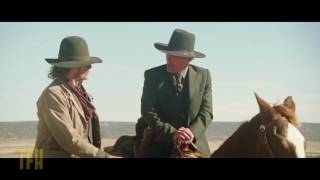 Rolling Stone - 09/18/2008
3.5 stars out of 4 -- "[A] terrific Western, a potently acted powerhouse that sticks in the mind and the heart....There is nothing abstract about Harris' approach to APPALOOSA. Every frame of the movie indicates his bone-deep respect for classic film Westerns..."
Los Angeles Times - 09/19/2008
"[I]n Harris and costar Viggo Mortensen, it has two actors who beautifully play the kind of tough, laconic, unflappable men Westerns could not exist without."
USA Today - 09/19/2008
"The dialogue, based on Robert B. Parker's novel and co-written by director and star Ed Harris, is a major asset....The movie's undeniable highlight is the chemistry between Harris and Viggo Mortenson..."
New York Times - 09/19/2008
"Mr. Harris can be an imposingly serious actor...but there is often a saving glint of mischief in his eye. And in APPALOOSA, his second feature as director, he leavens the atmosphere of costumed rigidity and somber stoicism with sly, relaxed humor."
Entertainment Weekly - 09/26/2008
"Irons is enjoyable nasty, enough to make you wonder why no one thought to cast him in a Western before."
Total Film - 12/01/2008
3 stars out of 5 -- "Ed Harris is the latest to Hollywood player to tackle the western genre....The laid-back lawmen supply the main pleasures..."
Empire - 12/01/2008
3 stars out of 5 -- "[T]he film sets about a gutsy collection of brawls, gunfights and getaways to spell out its celebration of John Ford's tall tales..."

Actor Ed Harris takes only his second stab at directing, following the Oscar-winning feature POLLOCK (2000) with this spirited western. Harris draws on a strong cast, many of whom have acted with him in previous films, to tell the story of two gunfighters attempting to bring peace to the small town of Appaloosa in the late 1800s. Virgil Cole (Harris) and Everett Hitch (Viggo Mortensen) ride into the windswept New Mexico town and are hired to bring vigilante entrepreneur Randall Bragg (Jeremy Irons) to justice. Bragg has imposed a reign of terror over Appaloosa, but his murderous actions are tempered when Cole and Hitch take control. Matters get complicated when widower Allison French (Renee Zellweger) flounces into town and variously woos Cole, Hitch, and Bragg, allowing Harris to throw in a few neat twists as his two principal characters attempt to bring the miscreant entrepreneur to justice.

APPALOOSA is a slow-moving and beautifully shot feature that perfectly translates the dusky New Mexico landscape to celluloid. The film stands shoulder to shoulder with 21st-century westerns such as THE ASSASSINATION OF JESSE JAMES BY THE COWARD ROBERT FORD and THE PROPOSITON, and much like those films Harris's feature draws heavily on deeply affecting performances from his leads. Irons is particularly affecting as the baleful Bragg, who brings a real air of menace to the screen any time he appears on camera. The nuanced turns by Harris and Mortensen play like a master class in subtlety, with the two seasoned actors perfectly delivering two stoic characters who are masking a lifetime of pain and suffering. Harris's feature is a welcome addition to the fold of introspective westerns, effortlessly standing alongside similar efforts such as Clint Eastwood's UNFORGIVEN or James Mangold's 3:10 TO YUMA.

No Country for Old Men
$8.40 Super Savings
Add to Cart

The Three Burials of Melquiades Estrada (Blu-ray)
$23.50
Add to Cart

The Assassination of Jesse James by the Coward Robert Ford
$12.10 Super Savings
Add to Cart

The Assassination of Jesse James by the Coward Robert Ford...
$12.80 Super Savings
Add to Cart

A History of Violence (Blu-ray)
$18.70 Super Savings
Add to Cart