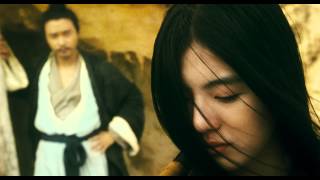 Two years after forming his own production company, Jet Tone, Hong Kong director Wong Kar Wai released ASHES OF TIME, a martial-arts epic based on THE EAGLE-SHOOTING HEROES, a series of novels by Louis Cha writing under the pseudonym Jin Yong. The film was set in jianghu, an imaginary world with its own views of good and evil. In 2008, unhappy with the many alternate versions of ASHES OF TIME available, Wong reedited and restored the film, working with the original negative and soundtrack, which were in severe disrepair. The new version, called ASHES OF TIME REDUX, which screened at such prestigious international gatherings as the Cannes, Toronto, and New York Film Festivals, is a breathtaking example of Wong's masterly storytelling technique, combined with the stunning cinematography of Christopher Doyle and gorgeous new cello solos recorded by Yo-Yo Ma. Leslie Cheung stars as Ouyang Feng, a mysterious man living alone in the desert, where people come to him when they need someone eliminated. He is visited annually by Huang Yaoshi (Tony Leung Ka Fai), who brings him stories from the outside world--and especially his lost love (Maggie Cheung). Meanwhile, Murong Yang (Brigitte Lin) has contracted to have Huang killed, and Murong Yin (also Lin) wants her brother taken care of. For a film that examines the role of memory in people's lives, Wong assembled an all-star cast that also includes Tony Leung Chiu Wai as a blind swordsman, Carina Lau as his wife, Charlie Young as a young girl seeking vengeance, and Jacky Cheung as a poor swordsman looking for work. ASHES OF TIME REDUX is a visual treat, with Doyle (who has also teamed with Wong on such well-regarded films as DAYS OF BEING WILD and IN THE MOOD FOR LOVE) capturing swirling sands and beautiful, treacherous landscapes, resulting in a stirring sensory experience.

Ouyang Feng is a native of White Camel Mountain. Raised by his elder brother, Ouyang's ambition is to become a famous swordsman. But faced with a choice between the woman he loves and martial adventures, he chooses the latter. Frustrated, the woman marries his brother. After ten years, Ouyang, now cynical and materialistic, goes to the desert and opens an inn. He becomes an agent for killers, hiring young but penniless swordsmen to do the dirty work of others. Every year during the peach blossom season, Ouyang is visited by a close friend, Huang Yaoshi, who, like Ouyang, also has a sad love story to tell--he once had an unconsummated affair with the wife of his best friend at Peach Blossom Land. Others Ouyang comes into contact with include the schizophrenic Murong Yang/Murong Yin; a down-and-out swordsman with failing eyesight (who turns out to be Huang's best friend); an impoverished young girl who wants to avenge her brother's death; and Hong Qi, another aspiring swordsman, and his loyal wife.