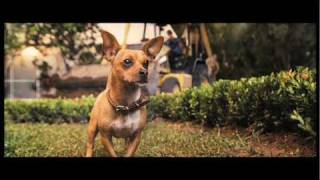 In Disney's unabashedly silly talking-dog movie BEVERLY HILLS CHIHUAHUA, Chloe (voiced by Drew Barrymore), the ridiculously spoiled title pet, is swept away from her comfortable 90210 existence, when the impulsive niece (Piper Perabo) of her wealthy owner (Jamie Lee Curtis) combines dog-sitting with a vacation in Mexico. When Chloe gets lost south of the border, her scrappy Chihuahua admirer, Papi (voiced by George Lopez), embarks on a mission to bring her back home. While Chloe's pint-size dog in shining armor searches for his posh crush, she must contend with the rough-and-tumble side of life, learning a few important lessons along the way.

Directed by Raja Gosnell, who is no stranger to dog-themed live-action/CGI flicks (see SCOOBY-DOO), CHIHUAHUA is an amusing diversion that is custom-made for canine lovers. Barrymore and Lopez are pitch-perfect in their vocal performances, and they are ably assisted by a bevy of Latino talent, including Andy Garcia, Edward James Olmos, and Cheech Marin. Although the film doesn't give its human actors a lot to do, it doesn't matter much, since the dogs are the reason for the entire show. In fact, the more the movie concentrates on its furry protagonists the more giddily entertaining it gets, as exemplified by a fun, fantastical doggie musical sequence that serves as CHIHUAHUA's undeniable highlight.

Get ready for a hilarious fun-filled adventure starring Chloe (voiced by Drew Barrymore), a diamond-clad ultra-pampered Beverly Hills Chihuahua who gets lost while on vacation in Mexico. Papi (voiced by George Lopez), an amusing Chihuahua who's crazy about Chloe, springs into action and heads south of the border to rescue her, while Chloe gets help from Delgado (voiced by Andy Garcia), her newfound friend and self-appointed protector. BEVERLY HILLS CHIHUAHUA from Walt Disney Pictures is a heartwarming and outrageously funny tale proving once again that good things do come in small packages. It's a real treat for the whole family.

Ghosts of Girlfriends Past (DVD)
$6 Super Savings
Add to Cart